skip to main content
Return to Fordham University
You are at:Home»Athletics»Fordham to Play at West Point: A Rivalry with Respect
Punter Joe Pavlik, GABELLI ’17, leaps upon seeing Fordham finally beat West Point in 2015.
When Fordham plays West Point on Sept. 1, they’ll be taking part in a storied yet sporadic football rivalry that goes back several generations. Fordham first played Army in 1891, when the Rams fell to the Black Knights, 10-6.

It would take more than a century for the Rams to score a win against the Black Knights.

Up until World War I, most East coast colleges played on a small scale. This so-called “infant era” brought Fordham together with Princeton, Columbia, NYU, Navy, and, of course, Army. It wasn’t until after the war that the Rams developed their legendary status. In 1936, sportswriter Grantland “Granny” Rice referred to Fordham’s front line as the Fordham Wall, which shortly thereafter evolved into the Seven Blocks of Granite with the legendary Vince Lombardi, FCRH ’37, anchoring the famous offensive line. 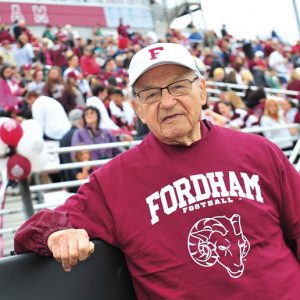 Andy Lukac played in the 1949 Fordham vs. West Point game.

After a brief stint as a student at Fordham Law, Lombardi worked as a high school teacher and football coach in New Jersey before returning to Rose Hill as the team’s assistant coach in 1947. West Point scooped him up the following year, thus setting the stage for a contentious Fordham-Army matchup.Before he left for West Point, however, Lombardi recruited Andy Lukac, FCRH ’51, for the Rams. Lukac rose to team captain and played the last game, in 1949, between the two teams before before Fordham discontinued its football program following the 1954 season (a hiatus that would last until 1964).

That 1949 game wasn’t pretty. It was cold and rainy, and the field was pure mud. The Black Knights shut out the Rams, 45-0, at West Point before a capacity crowd of 27,000 in Michie Stadium.

“They were tops in the country and we were just coming up out of the doldrums, but we were undefeated at the time,” said Lukac. “Lombardi was up there, and he knew all our weaknesses. Army did us in, but it was a day to remember, you can put it that way.”

Lukac said that he’s convinced that there were more penalties called in that Fordham-Army game than in any other game “in the history of football!”

“They’d hit us and we’d hit them back,” he said. “We had a lot of noses broken on that day, it was like a boxing match. At the end of the game everyone is OK, but during the game it’s another story.”

Most thought that the 1949 game would be the last against West Point after the University discontinued the football program.

Lukac said the postgame civility among players made perfect sense for two institutions that prized good sportsmanship. It’s a tradition that Jack Keane, GABELLI ’66, a retired four-star general, witnessed firsthand when Fordham and West Point finally met again 62 years later, in 2011, amid a freak October snowstorm that dropped six inches on the field. As with the game six decades before, it wasn’t pretty. Fordham lost, 55-0. 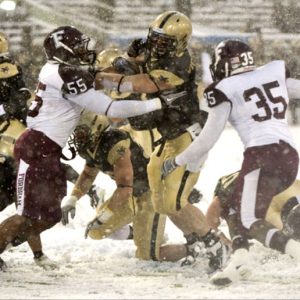 After a 62-year hiatus, the teams met once again in a freak late-October snowstorm.

By game’s end, the frigid stands were nearly empty. But a West Point tradition dictates that the home team appear before the corps of cadets and sing their alma mater, said Keane.

“When the West Point guys went over to the cadets, the Fordham guys saw what was happening and went over with them,” said Keane. “The superintendent, General Dave Huntoon, was standing next to me. He looked at me and said, ‘Wow, that’s something. You guys really understand. You get it.’ I said, ‘Yep. Yeah, we get it.’”

Joseph M. McShane, S.J., president of Fordham, has said on many occasions that Fordham and West Point share a common purpose. Keane agrees.

Sometimes a Win, Always a Ram

Despite having served nearly 40 years in the Army, Keane said he still identifies as a Ram. He reveled when, in 2015, more than a century after their first game, Fordham finally beat West Point, 37-35.

At the time, 84-year-old Lukac was also watching the game near the end zone.

“It was a moment of everything coming together,” he said. “We were just so happy, that the rest of the season didn’t seem that important really.”

Now 86 and a little less mobile, Lukac said he still plans to be in the stands on Sept. 1.

Moises Mura, a Fordham ROTC cadet who served 11 years in the Army as staff sergeant and is now a junior in the School of Professional and Continuing Studies, will also be there. Like Keane, Mura said his years in the Army haven’t diluted his loyalty to the Rams.

“I never called a university home, so I’m excited to do that,” he said. “I’m a student at Fordham and I intend to be a Fordham alumnus, so I’ll definitely be rooting for Fordham.”

Quarterback Kevin Anderson celebrates the 2015 Rams win with the team.