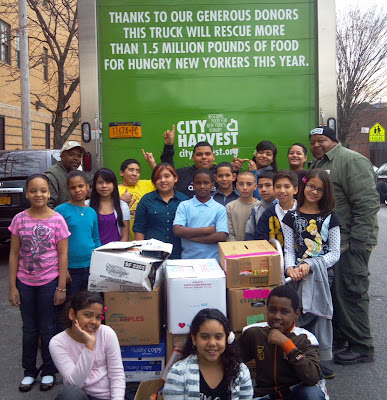 Since 1989, the Graduate School of Social Service (GSS) has been running a program that helps those Bronx schools showing high dropout rates to keep “at risk” students in school.

Known as the Liberty Partnerships Program (LPP), the dropout prevention initiative liaisons with I.S. 254 (just two blocks from the Rose Hill campus) to offer more than 80 students in grades six through eight tutoring, mentoring and social and emotional counseling.

Fordham’s GSS students do the counseling as part of their field placement curriculum. They spend 21 hours a week doing both one-on-one and group counseling with underrepresented students who might otherwise fall through the cracks in an already-taxed school system.

Part of the GSS’ larger curriculum, however, is also being mindful of social justice issues. So it was with great enthusiasm that GSS interns devised a friendly contest among the I.S. 54 classes to gather canned goods for needy families around the holidays.

Throughout the month of November the interns worked with the school’s parent coordinators to set up the class competition. Each day the middle school students charted the number of cans brought in by class members on a colorful graph on a hallway wall.

When the contest was complete, the school’s youngest sixth grade class, Class 601, was the winner. All in all, the students gathered more than 600 cans.

“They are really proud of themselves,” said Shelly Topping, LMSW, LLP’s program director. “They were very excited that the donations were going to families in need.”

As evidenced above, the winning class was also very excited to take a photo in front of the City Harvest truck, which picked up the donations for distribution on Dec. 15th. (photo by Benia Thomas)