skip to main content
Return to Fordham University
You are at:Home»University News»A New Prize Invites Greater Diversity in the Pages of The Observer at Lincoln Center
Editorial board members of The Observer in May 2022. Photo by Gabriella Bermudez, Class of 2025
This coming academic year, a new prize will go to a staff member of The Observer, the student newspaper at Fordham’s Lincoln Center campus, thanks to a financial gift from a faculty member seeking to help the paper’s staff meet their goal of publishing work by a greater diversity of writers and other creators.

The Many Voices Prize was established in June by Elizabeth Stone, Ph.D., the Fordham English professor who also helped establish The Observer itself in 1981 and served as its adviser for 35 years. Carrying a cash award of $1,500, the prize will be awarded with a preference for Observer staffers who are first in their families to attend college or who come from other underrepresented groups.

Stone, a first-generation college graduate herself, believes that journalism has “a kind of moral obligation to be a big table at which everybody could sit.” 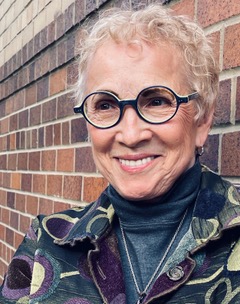 The prize is “a way to invite people to the journalistic table,” she said. “The hope is that once they join, they will feel invited, and they will speak what’s on their mind, they will do stories that are on their mind.”

Stone’s gift advances a key priority of Cura Personalis | For Every Fordham Student, the University’s $350 million fundraising campaign, which seeks to reinvest in the entire student experience and foster a more diverse and inclusive Fordham community.

Stone’s gift will fund one Many Voices prize in the coming academic year and eventually three per year. The prize will be awarded for three nonfiction articles or their equivalent published in The Observer, either in print or online, by a staff member. In addition to writing, these works could include video, podcasts, photography, graphic design, graphic texts, cartoons, or other formats that emerge from the evolving media landscape, Stone said.

The prize is coupled with a new effort to advance the career development of Observer staff members by harnessing the connections and expertise of Observer alumni, many of whom got their professional start on the award-winning publication and stay in touch with each other.

An alumni advisory board, formed from the Observer Alumni Affinity Chapter, is being created to advise Student Affairs in awarding the prize and to help connect the paper’s staff members with mentoring, networking, internship, and job opportunities. The board will also help with fundraising to augment the prize, said Anthony Hazell, FCLC ’07, communications director for a K-12 private school and The Observer’s editorial adviser since 2016.

Students for whom the award is meant are often working to meet their college expenses, “so hopefully offering a financial award to make up for the time that they spend on The Observer can help get their voices heard,” said Hazell, who served as the paper’s editor in chief as an undergraduate.

Stone announced the prize June 9 at the annual Block Party celebration at the Lincoln Center campus, saying that a robust diversity of journalistic voices is needed for the survival of our democracy.

The award also reflects her own experiences, she said in an interview. She challenged stereotypes in one of her earliest pieces of journalism, “It’s Still Hard to Grow Up Italian”—published in The New York Times in 1978, it incorporated narratives by several Italian Americans, and much of her early writing was about being the granddaughter of Italian immigrants at a time when, in popular culture, Italians were routinely associated with the mafia.

Allie Stofer, Observer editor in chief and an incoming senior at Fordham College at Lincoln Center, said she was excited to learn about the award because its cash prize could help students of diverse backgrounds make the time commitment required of Observer staffers. Maddie Sandholm, the managing editor and also an incoming senior at the college, noted that the Observer will also award a new $1,200 scholarship to one of its staff members in the coming year for similar purposes.

She said the paper has been making other diversity-related efforts in recent years, such as relaxing its meeting attendance requirement—to accommodate potential staffers who have conflicts—and hosting workshops on things like keeping biases out of headlines and page layouts.

“The chance to uplift new and underrepresented voices is something that has always and will always be invaluable to The Observer, and so we are honored that Elizabeth Stone … [has established] this prize to support and embody that mission,” Sandholm said.

Working with The Observer was the most engaging part of her job at Fordham to date, Stone said. She fondly recalled the daylong barbecues she hosted for the staff as a sort of retreat, as well as tricky editorial questions that fostered “teachable moments,” she said, “where there was a really vital conversation, and where I was delighted not to be the one who knew everything.”

She is proud to have helped develop and strengthen the paper over the years and hopes the prize will help The Observer stay in step with the anti-racism and multicultural perspectives that are being amplified in the Fordham curriculum.

“I really do believe in a kind of multiculturalism, but to believe in it, you have to see it all around you,” she said. The prize, she said, is “a way of helping to realize that vision.”