skip to main content
Return to Fordham University
You are at:Home»Colleges and Schools»Graduate School of Arts and Sciences»A New Master’s with a Mission in Public Media
“We’re allowing students take a year to contemplate and discern what their moral role is going to be as media professionals.”
Fordham is offering the first graduate communications degree available in New York City designed specifically to focus on nonprofit rather than commercial media.

Billed as “Media with a Mission,” the new Master’s in Public Media degree, undertaken in partnership with WFUV and WNET/Channel 13 public television, begins in the fall of 2016. It is one of only a handful of such programs nationwide.

The degree is offered through the Graduate School of Arts and Sciences and Department of Communication and Media Studies. It has two tracks: one for multi-platform journalism and a second for strategic communication. Jacqueline Reich, PhD, chair of the department, said the program reflects the greater trend of universities partnering with established media outlets.

But the Fordham program takes a decidedly Jesuit slant, she said, by partnering with nonprofits.

“We’re allowing students take a year to contemplate and discern what their moral role is going to be as media professionals in the 21st century,” said Reich. “If they contextualize the profession in which they’re operating and have the practical tools with which to enact those principles, then the result should be working to change society through exposing social problems and bringing attention to injustice.” 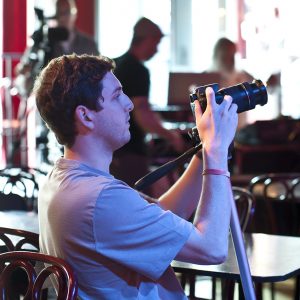 The program developed through conversations between the communications faculty and WFUV’s George Bodarky and Chuck Singleton. Singleton introduced Reich to WNET Chairman Neal Shapiro at Fordham’s Future of Journalism conference in 2013, who then put her in touch with WNET General Council Bob Feinberg. Feinberg also happens to have taught at Fordham Law since 1993

Feinberg said that today’s multiplatform media creates opportunities not just in crowdsourcing news content but in fundraising, as well.

“One of the fundraising stalwarts [of nonprofit media]has been the on-air pledge, but social media and crowd-based funding, like Kickstarter and IndieGoGo, are really the 21st-century equivalent forms,” he said.

“There’s a need to train in all the media,” said Bodarky. “Yet public media is different than commercial media. We subscribe to different values and those should be taught as well.”

Bodarky, whose career began at FUV when he was a Fordham student, said that he expects the program to build on the well-established legacy of bringing student work to the public eye.

“We hope to provide a platform where work in the classroom sees the light of day with an audience, whether that’s in online articles, on radio, or in video.”

He added that social media would play a big role, too, especially in reaching minority communities using social media on a wide scale.

“We need to engage with new audiences to develop a better understanding of diverse communities,” he said, “and to best meet the needs of those communities.”

While Bodarky spoke to the need for serving the audience with social media through journalism, Assistant Professor Jessica Baldwin Phillippi, PhD, said that students studying strategic communications would learn how to advocate on behalf of nonprofits.

“They will not only create multiplatform campaigns, but they’ll also learn to break down an organization’s needs, to mobilize people, and to raise awareness through social media,” she said.

All of this should gel with Fordham students, who are a self-selecting bunch that believe in social justice, said Beth Knobel, PhD, the department’s associate chair.

“Our students are about finding ways to make the world a better place, and the world needs all the help it can get right now.”