skip to main content
Return to Fordham University
You are at:Home»University News»A Growing Network Supports First-Generation Students at Fordham
Alexa Stegmuller, left, and Jin Lin Chen, with holding literature about the First Gen Network at one of the group’s Nov. 8 sign-up events. Photo by Taylor Ha
This year, a new organization at Fordham is putting the focus on the needs and experiences of students who are the first in their families to pursue college degrees—and helping them find connection and support.

The First Gen Network debuted in the fall, founded by students after Fordham administrators held listening sessions last year about first-generation students’ experiences. It’s proving a valuable connection point for students who may arrive at the University less familiar with college life—and college opportunities—because of their family backgrounds.

Jin Lin Chen, a senior in the Gabelli School of Business and one of the founding student members, said she’s excited about the First Gen Network because of the importance of outreach to different social groups at the University to foster diversity and inclusion. “I’m glad I’m leaving the school knowing that this network exists,” she said.

The group held sign-up events at the Lincoln Center and Rose Hill campuses on Nov. 8, celebrated as National First Generation Day since 2017. It happened to be the same day that the University launched a fundraising campaign, Cura Personalis | For Every Fordham Student, that seeks—among other things—to honor Fordham’s heritage of welcoming first-generation students by ensuring that the University is accessible to them and to students of other diverse backgrounds. 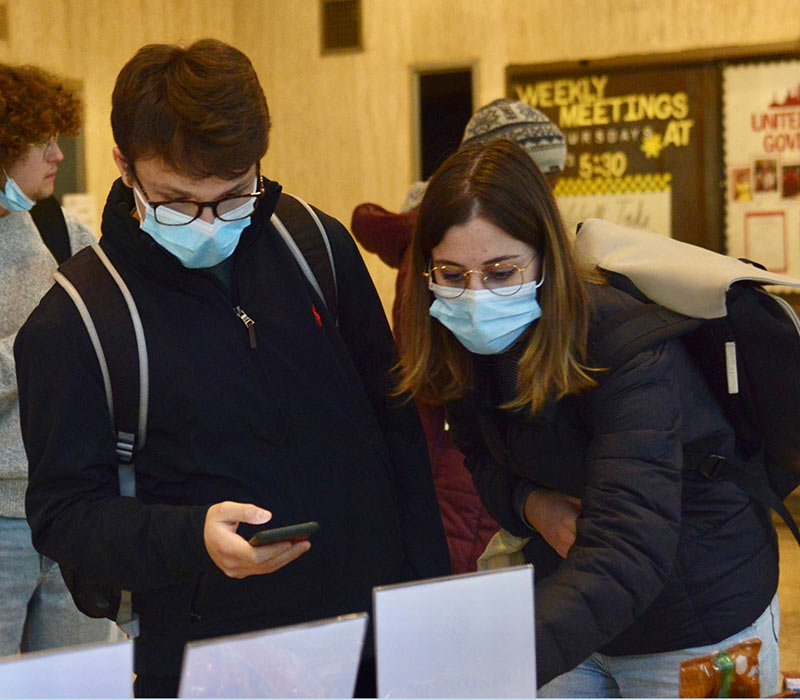 Two people checking out the First Gen Network during is Nov. 8 event at Lincoln Center. Photo by Taylor Ha

The network has generated strong interest; Alexa Stegmuller, a second-year Fordham College at Lincoln Center student and another founding member, estimated that more than 200 people have joined its email list. For its next event, the group is hosting a spring mixer on March 25 at the new campus center at Rose Hill.

The group welcomes all students, not only those who are first-generation, as well as administrators and faculty. On Nov. 29, the First Gen Network and the Diversity Action Coalition held a panel discussion that included professors who were first-generation students themselves.

Nicole Varela, a first-year Fordham College at Lincoln Center student, joined the group at its Nov. 8 event. Her parents both attended college in El Salvador but never finished. She benefited from having seen her older brother apply to college—after he was able to find help from people who knew the process.

“SATs, ACTs, college essays—I feel like people who know a lot more about that have an advantage,” she said.

Stegmuller noted that many first-generation students have to overcome the inclination to do everything themselves, since that’s what they’re used to.

Seeing a professor during office hours, asking a dean for help, checking in with a counselor—these things can feel weird for first-generation students, she said. She recalled a professor handing out a syllabus in one of her classes and seeing that it had a listing of student support services—three pages’ worth. 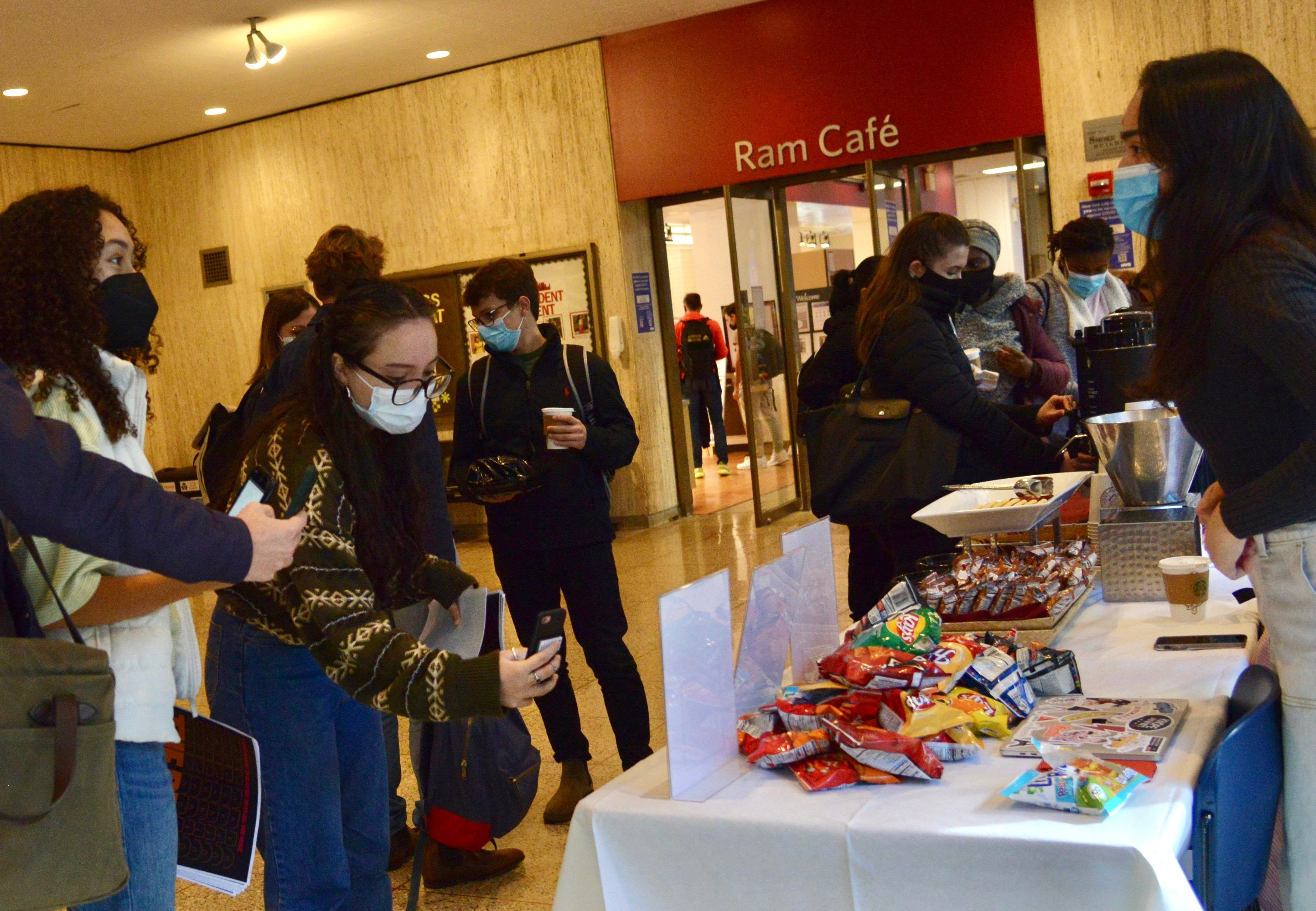 The First Gen Network set up an information table at Lincoln Center on Nov. 8. Photo by Taylor Ha

“I didn’t expect that of a college coming in, just because I didn’t really have an idea of what college was until I got here,” she said. “There are so many people here wanting to help.”

In high school, her friends tended to know the college application process “inside and out, basically,” because their parents or siblings had gone to college, she said.

“It’s daunting to like be like, ‘I think I need to ask for help,’ or ‘I’m really not sure, I don’t know what a FAFSA is,’ that sort of thing,” she said, referring to the Free Application for Federal Student Aid.

The application process was hard for her and her parents—“they didn’t really go through that experience,” she said. “It was a learning experience for all three of us.”

The Impact of Giving

She and Jin Lin Chen said scholarships and financial aid made all the difference in helping them enroll at Fordham. Stegmuller received a Jogues Scholarship and a need-based grant from the University. Jin Lin Chen received a federal Pell Grant in addition to a few different scholarships from Fordham. In addition to helping her pursue her dreams and take advantage of opportunities like studying abroad, “it was a way that I could somehow give back to my parents,” she said.

Scholarships and financial aid are one priority of the Cura Personalis campaign. Campaign gifts could make a difference for first-generation students in any number of other ways, said Christie-Belle Garcia, assistant dean for student support and success at Fordham College at Rose Hill.

They could provide funding for travel to conferences, for instance, or stipends for unpaid internships, or the creation of a summer bridge program that helps incoming first-generation students familiarize themselves with Fordham and the college experience, she said.

Garcia helped launch the First Gen Network along with Tracyann Williams and Marisa Villani, her counterparts at Fordham College at Lincoln Center and the Gabelli School of Business, respectively.

“It started organically, because we were hearing from students that there was a need,” Villani said. They held a few listening tours via Zoom, and then students took the lead in launching the group.

“We work with them closely, and at the same time we want to make sure that the ideas are coming from them,” Williams said. “Because they are amazing.”

The First Gen Network welcomes members of the Fordham community who are first-generation students as well as those who wish to support them. See here for more information about the group or send an email to [email protected].

To inquire about giving in support of first-generation students or to meet other needs at the University, please contact Michael Boyd, senior associate vice president for development and university relations, at 212-636-6525 or [email protected]. Learn more about Cura Personalis | For Every Fordham Student, a campaign to reinvest in every aspect of the Fordham student experience.