skip to main content
Return to Fordham University
You are at:Home»Athletics»A Fordham Voice Among the March Madness 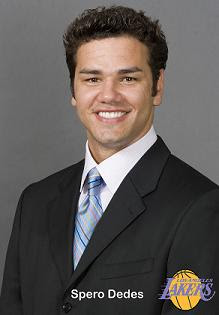 On Friday afternoon, Dedes, who got his start at WFUV (90.7 FM, wfuv.org ) will announce the Notre Dame- Akron game followed by the Texas A&amp;M game against Florida State. Later that evening, Dedes will return to the air as the No. 14-seed Saint Peter’s Peacocks try to upset the No. 3-seed Purdue Boilermakers.

Dedes is also in line to finish a busy day behind the mic with the matchup between Georgetown and Virginia Commonwealth, who defeated USC in the tournament’s first round of play.

In 2001, Dedes received the inaugural Marty Glickman Award, given annually to the Fordham announcer who best exemplifies the standards set by the late sports broadcasting icon. Along with Bob Aherns, executive producer of WFUV sports, and John Cirillo, FCRH ’78, Spero credits Glickman for helping him perfect his craft.

“[Marty] would be very harsh on most of the kids’ [tapes],” Dedes told FORDHAM magazine in late 2005. “But he called me in my dorm room after I’d worked a weekend basketball game and told me he’d heard something in my tapes and that if I kept working on it, I had a bright future in the business. That gave me confidence.”