“Food is life. And for a family in the restaurant business, we stand by that very strongly,” said Cristina Rocco, a rising junior at Fordham College at Rose Hill who serves meals with her father and two older brothers.

The idea was born a few months ago, when Cristina’s older brother Alex, a graduate of the Culinary Institute of America, lost his job as a chef at a high-end New York City restaurant. Along with many others in the food industry, he’d become unemployed due to the pandemic. But Alex still wanted to use his expertise to help others.

On April 20, Alex and his family began serving meals in Bridgeport, a place where more than 20% of the population lives below the poverty line, through their new not-for-profit called CT Central Kitchen. The organization, which receives funding through a GoFundMe page, was founded to help out the local community in a time of crisis. 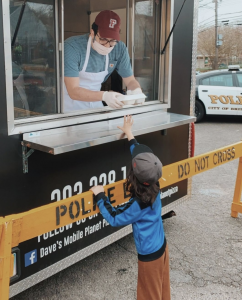 No strangers to the restaurant industry, the Roccos know how to feed a crowd. Their family has three generations of experience, starting with Cristina’s grandfather, who owned a coffee shop in the Bronx, followed by Michael and his two brothers, who started the Planet Pizza chain that now has nine locations in Fairfield and Westchester counties, said Cristina.

Every Monday, the family serves around 250 free plates of chicken, beans, and rice from a food truck to Bridgeport community members, including local health care workers. With the help of their state representative Christopher Rosario, they have identified and traveled to the areas where their food is needed the most.

On May 25, the Rocco family distributed 200 hot meals on East Main Street and donated leftover platters to a nearby family shelter. The following Monday, they worked in tandem with the Southwest Community Health Center, where they gave out free meals and the health center provided free water bottles, masks, and gloves to community members. Most recently, Pepsi donated more than 800 cans of water to accompany CT Central Kitchen’s future meals, said Cristina. 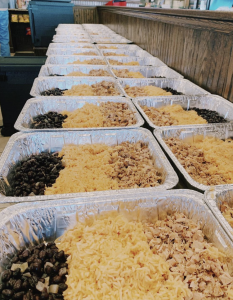 Each trip is a combined family effort. Every week, Alex and his father, Michael Rocco, GABELLI ’90, prepare the food, including 140 pounds of chicken. Cristina oversees their publicity and social media efforts and helps distribute food. Their brother Serafim Rocco, GABELLI ’18 and ’19, who now works as an assurance associate at PriceWaterhouseCoopers, helps the family manage its resources.

On May 31, state and local leaders honored the Rocco family for establishing CT Central Kitchen.

“CT Central Kitchen, Alex and his family—they’re heroes during this time, feeding people, making life better. We can all follow that model,” Senator Richard Blumenthal said at a small ceremony in Bridgeport, which was also attended by Joseph P. Ganim, the city’s mayor.

The pandemic has been stressful for many people, but there are plenty of ways to help out your local community, said Cristina.

“I’ve seen friends, and even on the news or social media, people going to local hospitals and delivering trays of food. Delivering one tray of food … that goes a long way,” she said. “Even if you can’t go [in person], there’s a lot of online places and venues that need support and donations to help provide [resources]during this time.”