Below, from the spring 2014 issue of FORDHAM magazine, is the Fordham’s New York feature on “After Midnight,” which recently earned a 2014 Tony Award nomination for Best Musical.

In 1930s New York, jazz was the music and Harlem’s Cotton Club was the place to hear it. Inside that famed nightclub on 142nd Street and Lenox Avenue, the city’s elite white society packed the house to see and hear many of the best black jazz musicians and entertainers of the era. The club’s glitz and glamor is brought to vivid life on Broadway in After Midnight, a rollicking, sparkling production lit by dozens of vocalists and dancers—including four graduates of the Ailey/Fordham B.F.A. program: Marija Juliette Abney, Taeler Elyse Cyrus, Erin N. Moore, and Monique Smith.

Through more than 25 numbers, the show celebrates the years when Duke Ellington led the Cotton Club Orchestra. His songs, such as the sultry “Creole Love Call,” and his arrangements of others’ tunes, like the rousing “Freeze and Melt,” flow through the theater from the horns, woodwinds, and rhythm section of the Jazz at Lincoln Center All-Stars. The big band, handpicked by maestro Wynton Marsalis, rightfully sits not in an orchestra pit, but on stage, just as Ellington’s orchestra did at the old Cotton Club. It’s not so much a Broadway musical as it is a flashback to one spectacular, idealized night at the popular club, a night that almost begs for the Brooks Atkinson Theatre to remove some of its seats so theatergoers can jive along with the performers. 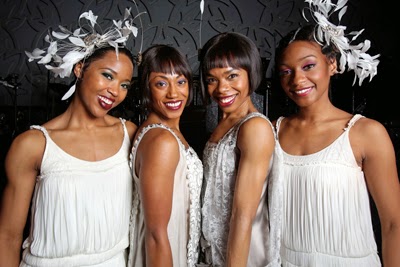 “That’s a special thing about this show,” said Monique Smith, FCLC ’02. “It doesn’t have a big story line or a whole lot of dialogue; it’s just based on the talent of the cast. That’s why I love being in this show.”

Smith, Abney, Moore, and Cyrus (in her Broadway debut) spin and swing across the stage, making six costume changes during the 90-minute show. It’s all about celebrating the flirty melodies and flighty improvisations of the kind of jazz that swirled around inside the club during its heyday.

“It was a time when big band jazz was really coming into its own,” said Mark Naison, Ph.D., professor of history and African American studies at Fordham. “Musically, it was unbelievable. This wasn’t jazz to listen to, this was jazz to dance to.”

Dulé Hill, from USA Network’s Psych, acts as the emcee for the evening, singing and dancing and dropping snippets of poetry by Langston Hughes, an Ellington contemporary perhaps best known for the opening lines of “Harlem” (“What happens to a dream deferred? / Does it dry up / like a raisin in the sun?”). Hughes’ words hint at a complicated racial history that is largely absent from the show.

The Cotton Club, after all, was a whites-only joint run by the mob, showcasing black artists on stage while barring them from sitting at the tables as patrons. “It was a good time, but it was not egalitarian,” said Naison, who wrote the foreword to A Dancer in the Revolution (Fordham University Press, 2014), a memoir by Howard “Stretch” Johnson, a Cotton Club performer who went on to become a Communist Party youth leader and a professor of black studies.

“Some of the most powerful and chilling passages of the book,” Naison writes in the foreword, “describe the white underworld characters who controlled the Cotton Club and the upper-class whites who came to Harlem for all kinds of illicit thrill-seeking, people whom Johnson found himself needing to please, or manipulate, if he wanted to find any kind of work as an entertainer.”

Broadway shows are not racially exclusive places, like the Cotton Club was, but pleasing casting directors and finding theater work today may not be any easier than it was in Johnson’s time.

At the After Midnight auditions, the show’s producers were looking for “regality and refinement,” said Smith, who credits the Ailey/Fordham program for being “quite successful at training incredibly refined dancers.” 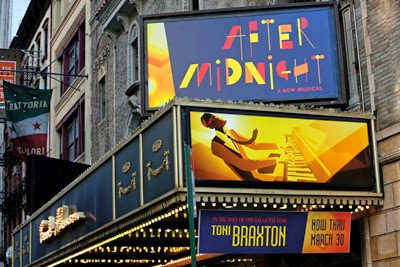 “Many times in my dance career, I have had to do a similar balancing act of juggling dance class, auditions, voice lessons, shows—sometimes all in the same day,” said Erin Moore, FCLC ’05, a St. Louis native who has performed in Rigolettoat the Metropolitan Opera and danced with Philadanco.
Ana Marie Forsythe, former director of the Ailey/Fordham program and chair of the Horton department at the Ailey School, taught all four alumnae. She’s not surprised by their success. “Not only are they talented dancers,” she said, but their “enormous versatility” also “gives them the opportunity to seek out any kind of work.”
After Midnight opened last November on a stretch of West 47th Street that, this spring at least, might as well be called Fordham Way. Across the street is the Barrymore Theater, where Fordham alumnus Denzel Washington, FCLC ’77, is starring in a revival of Lorraine Hansberry’s A Raisin in the Sun.On March 13, Washington’s name incited a chorus of cheers from the Ailey/Fordham alumnae, who, fresh out of their wigs and flapper dresses, sat at the edge of the stage to talk with a group of 30 alumni who had just watched the show. Fordham’s Office of Alumni Relations, which hosts cultural events for alumni throughout the year, organized the special talkback session with the cast.

Attendees wanted to know how the four dancers made it from the Lincoln Center campus to Broadway. Moore said it helps to be a part of the Fordham network.

“Once you graduate, there is no roadmap telling you what to do next,” she said, “but it is helpful to have alumni in different parts of the field. It gives you access to opportunities that you would have otherwise missed.”

She crossed paths with Abney, Smith, and Cyrus (a 2008 graduate) at Fordham, and they see each other and many alumni at the same auditions. “We pushed and supported each other as students,” Moore said, “and those students are now my community in the professional dance world.”

Abney, a 2007 graduate, added, “Now we’re all in the same dressing room, and we love that.” They also love helping to bring about a “rebirth of the Cotton Club.”

“Every night we give of ourselves,” Abney said, and “pay homage to those who came before us, to all the black artists who made a home at the Cotton Club.”