skip to main content
Return to Fordham University
You are at:Home»Living the Mission»A Conversation with Cardinal Versaldi: Inclusivity, Catholic Education, and Fordham’s Global Identity
Monsignor Thivierge, secretary general of the Pontifical Foundation Gravissimum Educationis; Father Cecero; Cardinal Versaldi; Board Chair-Elect Armando Nuñez; and President Tetlow. Photos by Taylor Ha
During a recent address to a Fordham delegation visiting Rome, one of the Vatican’s top officials—Cardinal Giuseppe Versaldi, prefect for Catholic education—emphasized the importance of inclusion, especially in the realm of Catholic education. It’s critical for Catholic schools like Fordham to maintain their religious identity, he said in the talk, while fostering dialogue with those from different faiths and welcoming people from all walks of life.

“It’s important to combine and integrate the Catholic identity and the capacity for dialogue. We must not abide to extremes, to close our institutions and ourselves, and not just work together with people who have the same faith, the same ideas, the same values,” said Cardinal Versaldi, who has served over the past seven years as prefect of the Congregation for Catholic Education, where he oversees all Catholic schools and academic institutions across the world. The congregation establishes guidelines for Catholic schools and helps diocesan bishops to supervise schools, train educators, and care for students.

A Time for Inclusivity

Members of the Fordham delegation praised the cardinal for his progressive message. 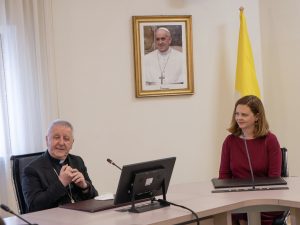 “I’m very impressed. I grew up in a time when we weren’t inclusive, and it’s so nice to hear that while we need to honor our mission, we also need to have respect for people of other beliefs and foundations,” said former trustee Elizabeth “Betty” A. Burns, FCLC ’83, a longtime Catholic who joined the pilgrimage to Rome. “We set a standard, and we invite people to participate, as opposed to requiring them.”

The meeting with Cardinal Versaldi was part of a Fordham weeklong pilgrimage last June to mark the 500th anniversary of the spiritual conversion of St. Ignatius Loyola, the founder of the Jesuits, who spent 15 years in Rome. The cardinal’s speech, delivered in the heart of the Vatican City, was part of a series of meetings with Fordham and Vatican officials to develop a closer relationship with the highest levels of the church.

The cardinal addressed three critical topics in his speech to the Fordham delegation, which included President Tania Tetlow, members of the University’s senior leadership, and trustees. His first topic was the importance of dialogue and inclusion in Catholic education. He encouraged the delegation to foster dialogue with potential students from non-Catholic backgrounds and to focus on helping them become well-educated people out in the world.

Cardinal Versaldi also stressed the importance of the compatibility between faith, science, and reason—a major component of Jesuit education that is sometimes challenging to navigate.

John Cecero, S.J., vice president for mission integration and ministry at Fordham, said that the intersection of the three is critical when searching for the truth.

“We live in a world where many people question the value of faith,” said Father Cecero. “They either see faith as irrelevant to contemporary life or as a threat to peaceful co-existence. Some people say it’s because of faith, whether’s it’s Islam or Christianity or any other faith, that members of society are divisive and even incite violence. What Cardinal Versaldi argued for—which is a traditional Catholic position—is that there is a compatibility between faith, science, and reason. Faith that becomes detached from reason and science runs the risk of inciting fanaticism, but faith that informs science and reason leads to truth—the most whole and complete appreciation of what is and what matters to human beings.”

Finally, Cardinal Versaldi highlighted the global nature of the church, which continues to grow its number of Catholics worldwide. 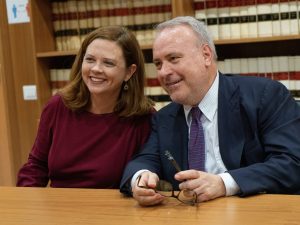 Andrea Mennillo, a member of the Fordham delegation and an Italian-born businessman who serves as the globalization council lead on the Gabelli School of Business’ advisory board, said that the Catholic faith is global because anyone can be Catholic. And so is Catholic social teaching—which grows compassion and respect in future leaders who are not only well-informed and analytically trained, but aware of their responsibility to care for the less fortunate, he said.

Now it’s time for Fordham to expand its global appeal, said Mennillo, who also serves as chair of the Fordham London Advisory Board.

“We have more room to grow internationally. In Europe, it’s easier because the roots of Fordham are here, as we saw together. But Asia is also a great opportunity for us because of its longtime tradition of Catholic education,” he said.

At the end of the meeting, Kim Bepler, a Fordham trustee and philanthropist, said it was “inspiring and forward-thinking” to hear the cardinal’s thoughts on the Catholic identity and the mission of the Jesuits—and perhaps most importantly, to not lose sight of the mission of Fordham, the Jesuit University of New York.

“We are inclusive, and we are also welcoming,” said Bepler. “As the educational model changes, we change—and it’s for the better.”

Cardinal Versaldi and Monsignor Thivierge with the Fordham’s senior leadership