skip to main content
Return to Fordham University
You are at:Home»University News»87-Year-Old Veteran Returns to Fordham to Complete Bachelor’s Degree
Photos by Argenis Apolinario
One night this past spring, 87-year-old John Lenehan was lying awake in bed at three in the morning, thinking about his 13 grandchildren. Ten had already graduated from college, two are set to graduate in 2022, and the youngest will finish in 2023. Most have advanced degrees, with several in law, medicine, and philosophy. All of his six children hold a degree. He then started thinking about his unfinished time at Fordham College, back when the University still had an outpost at 302 Broadway in Manhattan. 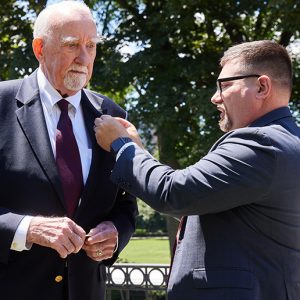 “I just thought it was just about time that I went back and joined them as a college graduate,” said Lenehan.

The next day he wrote a letter to Joseph M. McShane, S.J., president of Fordham. After serving in the Army during the Korean War, he explained, he started at Fordham on the GI Bill.

“Now at the age of 87, one of my greatest disappointments has been not receiving my degree from Fordham University,” he wrote.

Father McShane knew that the School of Professional and Continuing Studies would be a perfect fit.

“When we saw the letter, we said ‘Of course!’ and dug up his original transcripts,” said Andrea Marais, associate dean at the School of Professional and Continuing Studies.

Lenehan started at Fordham as an accounting major in 1956 and later focused on business. He recalled a rickety old elevator that took him to classes alongside law students. His commute from Queens took just under an hour, he said. But when a job opportunity presented itself in 1961, he withdrew and moved to Connecticut. His burgeoning career soon took him to KLM Royal Dutch Airlines, Xerox, and IKON Management Services in Dublin, where he was managing director. His family grew to six children and returning to college became less a priority.

Marais said Lenehan had only about 27 credits left to complete his degree. As an independent major, he will receive credit for his life experience, including fine art, as he is also an accomplished stained-glass artist, she said.

“Between the life experience and his existing credits, he only has a few courses left to complete his degree,” she said. He is expected to graduate in May 2022.

On a Zoom-based Father’s Day party held this past June, Lenehan “showed up” wearing Fordham T-shirt and announced to his children, grandchildren, and great-grandchildren that he was heading back to school.

Having navigated Zoom technology during the pandemic, Lenehan plans to complete much of his remaining coursework online. As he spends much of his time in Florida, remote learning will work best for him, he said.
“I guess this time around, it has to be by virtual as opposed to 60 years ago down to 302 Broadway, but I think I’m prepared for that,” he said. “I don’t know anything about virtual learning, but I think I can adapt to it.”

He has made one exception to online learning though. On June 24, Lenehan traveled to Fordham’s Rose Hill campus to complete the paperwork for his readmission. Matt Butler, director of Military and Veterans’ Services, picked him up at the Metro North station in a golf cart and whisked him off to Keating Hall to meet Anthony Davidson, Ph.D., dean of PCS. Today, Lenehan is a rising senior.

“As an 87-year-old, I haven’t felt as excited about getting something done since my wedding day and first night at 302 Broadway,” he said.

Lenehan in front of the Victory Bell at Rose Hill