skip to main content
Return to Fordham University
You are at:Home»University News»Walking in the Shoes of Refugees
Several students cram into a raft, as part of an installation conjuring refugee experiences.
With the refugee crisis in the news almost daily, how well does the average student understand the situation? It’s a question that Campus Ministry posed to students on Oct. 24 through an installation event at Rose Hill titled, “Walk a Mile in My Shoes: A Refugee’s Journey.” The event will take place again at Lincoln Center on Nov. 30. 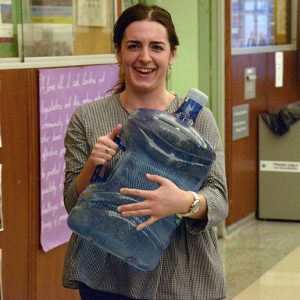 Participants carried water just a few feet to get a sense of the daily chores usually performed by refugee children several times a day.

The exhibit, which has the vibe of an interactive art installation, asks students to align themselves with a real person, not an abstraction. Immediately upon “checking in,” students are assigned a Government Registration Card that reflects the name of a real refugee.

One refugee represented in the exhibit was 32-year-old Jorge, a Colombian living in a Panamanian refugee camp with his wife and children. The family was forced from their home by the Colombian paramilitary, and in Panama, his identification papers are useless. He can’t move around freely or work.

“This area is our prison,” he says of the camp.

Assuming the refugee’s identification, student-participants then go to a table where pieces of paper represent basic needs, such as a passport, cash, baby formula, tools, and more. Refugees are permitted to pick eight such belongings with which to “flee” their country. 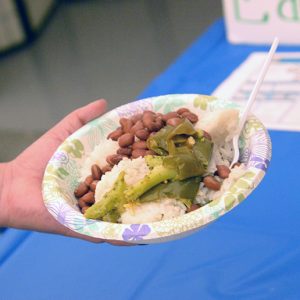 A small plate of food represents the daily allowance for refugees.

On approaching the raft that will take them to a new home, refugees are told that they can only bring two items on board. What to choose? Cash? Baby formula? The refugee is forced to make cash as one of the choices, because it costs money to get on the raft. Once on board, that cash is taken, and the refugee has just one item left.

From the start, students are asked to identify with refugees by making decisions similar to those fleeing crisis situations. But on arrival at “Camp Hope,” they are no longer able to make choices at all. Once a refugee gets off the raft, a coin is tossed to determine whether they’re healthy enough to even enter the camp. If not they could be quarantined for an indefinite amount of time.

The interactive installation takes participants through many other refugee experiences, such as a search for food, shelter, water, education, and the rarest of all: resettlement.

Sophomore Gina Barba was not the only student stunned upon hearing that the statistics are bleak. 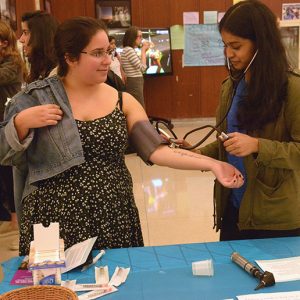 In the simulation, a flip of the coin determined whether a refugee would get health care.

“Only one percent of refugees are resettled—one percent!” she said from inside the temporary shelter she had been assigned to. “I have malnutrition, and they told me that I could come into the camp but [that]  I was going to die very quickly. They said, ‘There’s nothing we can do for you.’”

“There are so many steps and so many people trying to get to so many places,” he said. “It’s scary to think that the vast majority aren’t going to get anywhere. The refugee I was assigned to got his medicine, but no room and no education. And it’s impossible for him to move out.”

Not all the students were new to the refugee experience. Junior Kat Martucci, an international political economy major studying Spanish and Arabic, recently did an internship that brought her into contact with a young Bronx woman who had relocated from Ghana. The young woman trusted Martucci with her story.
“I was surprised how much she trusted me, but then she had to trust me with these details of traumatic events from her past,” she said. 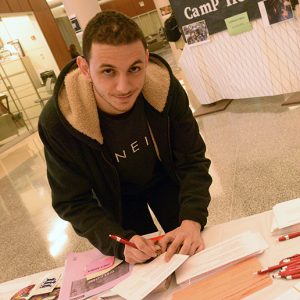 The last stop in the installation included an advocacy table with information on refugees and DACA, as well as an opportunity to write to Congress.

Given the large Ghanaian and South American communities just beyond the gates of Rose Hill, said Martucci, Fordham students “may not know they’re having contact with refugees” all the time.

Though senior Ameen Al-Qadi grew up comfortably as an American citizen, he said that the journey of his grandparents and his parents from Palestine some decades back was challenging, though not nearly as severe as what refugees are experiencing today. The interactive installation reminded him of his foreign friends at universities who, because of President Trump’s travel ban, are fearful of leaving the country lest they forfeit their American education.

“They were instructed not to leave, otherwise they may not be able to come back. So they can’t see their families until they finish school—and these are the luckier people,” he said. “Not everybody is as lucky and as privileged as we Americans. Our citizenship alone guarantees that there will be some kind of life here.”