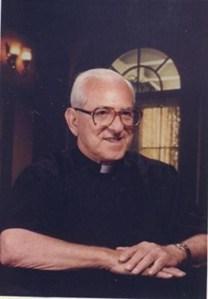 The Rev. Emil Francis Fardellone, SDB, GSAS ’50, died December 30, at the age of 96 in the hospice section of Wynhoven Health Care Center in Marrero, La. He had entered hospice at the  on Nov. 9 after suffering a fall and then being diagnosed with cancer of the esophagus.

Father Fardellone was born in Manhattan on November 10, 1916 and was baptized and confirmed at the Salesian parish of Mary Help of Christians on East 12th Street. He enrolled at Don Bosco Seminary in Newton, N.J., as a junior in high school in July 1931. He went on to the novitiate in September 1933 and made his first profession of vows on September 2, 1934. He graduated from Don Bosco College Seminary in 1938 with a B.A. in philosophy.

He was ordained on July 2, 1944, in Newton by Bishop William F. O’Shea, M.M., titular bishop of Naissus and former vicar apostolic of Heijo, (North) Korea.

Father Fardellone continued his studies at Fordham, earning an M.A. in English literature and modern history in 1950. His thesis was titled “The Religious Beliefs of Robert Browning.”

He was appointed the New Rochelle Province’s superintendent of schools, where he served from 1996 to 1967, and Don Bosco Tech’s director of development from 1967 to 1970.

In 1970 Father Fardellone took on parochial ministry, serving as pastor of St. Rosalie’s Church in Harvey, La., for 13 years. In 1982, he was asked to establish St. John Bosco Church, also in Harvey, initially as a mission of St. Rosalie and shortly after as a parish .

He was the founding pastor and builder, remaining there until 1994. He and the St. John Bosco parishioners were happy to be able to celebrate the burning of the church’s mortgage in 1986, a mere three years after the start of the 700-seat church’s construction. The parish also built a middle school, which is affiliated with St. Rosalie’s elementary school, and a large parish family life center.

At age 78 he served on the staff at Don Bosco Tech in Boston, the provincial residence in New Rochelle, N.Y., St. Kieran’s Church in Miami,, and from 2005 until his final illness, at Archbishop Shaw High School in Marrero, La. As long as he was able, he continued to offer his priestly services and adult religious education.

In 2011 He told the Clarion Herald newspaper, “The Bible says, ‘You are a priest forever.’ There’s no retirement from the priesthood.”

Recalling his decision to enter the seminary at age 15, he said, “Since 1931 to this date, I don’t regret a second of it. Not a second.”

Funeral rites were celebrated at St. John Bosco Church in Harvey, La., on January 2 and in the chapel of Salesian High School in New Rochelle on January 4. Father Fardellone was buried in the Salesian Cemetery in Goshen, N.Y., on January 5.