skip to main content
Return to Fordham University
You are at:Home»Commencement»170th Commencement Honors the Class of 2015

They took the campus by storm, arriving alongside Hurricane Irene in 2011 and leaving amid thunder in 2015.

Nevertheless, the bouts of rain couldn’t dampen the graduates’ spirits at Fordham University’s 170th Commencement, held May 16 at the Rose Hill campus.

A crowd of nearly 20,000—students, their families and friends, and the Fordham faculty, staff, and administration—gathered on Edwards Parade to send off more than 4,000 members of the Class of 2015. 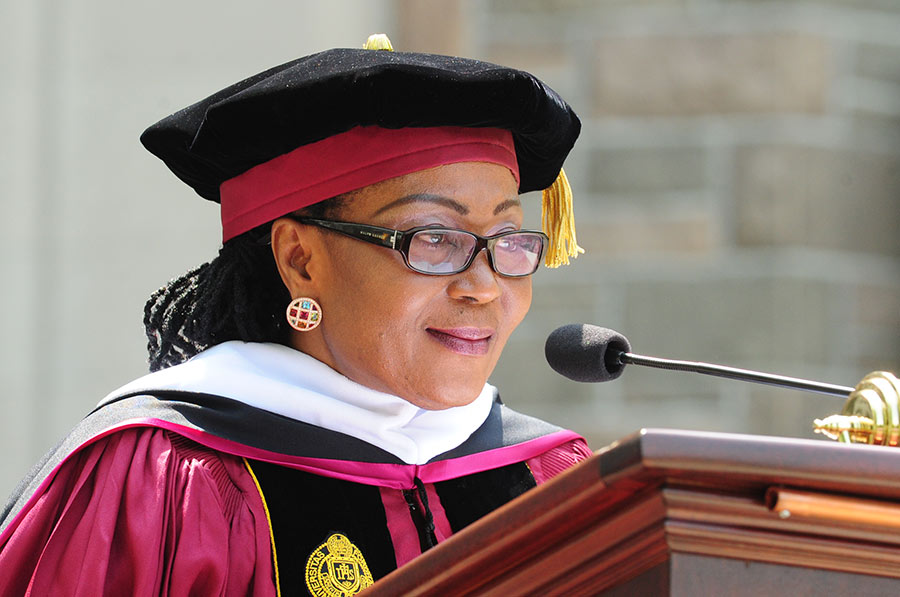 Delivering the keynote address was Nana Lordina Dramani Mahama, First Lady of the Republic of Ghana and an internationally renowned advocate for empowering women and helping the poor and marginalized.

The wife of Ghanaian President H.E. John Dramani Mahama, Nana Lordina Mahama is the president of the Lordina Foundation, a nongovernmental organization that works to make healthcare more accessible in Ghana and to expand educational opportunities. Her work for social justice is a mission that she shares with Fordham.

“I admire Fordham for a number of reasons, including your location here in the Bronx,” said Mahama, who received an honorary doctorate of humane letters. “This is a university that has a good history and background of working for our community.”

It is not uncommon to define ourselves by our careers, identifying as scientists, social workers, or religious leaders, Mahama said. These identities are valuable, but it is equally important that we forge strong relationships with our communities.

For more Commencement coverage, visit our Commencement page.
“It is about our humanity, the ability in our own little ways to respond to the society in which we live and work,” she said. “You must make an effort to lend a hand to others, especially those who are less privileged than us.”

She urged the new graduates to continue to strive for excellence, but do so while heeding the commandment at the cornerstone of our humanity: “to love thy sister as thyself.”

“Opportunities are presented to us at every stage of life, and every opportunity comes with a pedestal on which to stand to do more not only for ourselves but also for others,” she said.

“Even as we … see ourselves advance in education, finance, and health, we should not forget to advance also in the very thing that defines us—our humanity.”

Jane Kani Edward, PhD, assistant professor of African and African American Studies, said that the First Lady of Ghana’s appearance at Fordham was significant for Ghanaians in general—of which there are many in the Bronx—and especially for African women.

“Her appearance shows Fordham’s commitment to build bridges not only with Ghanaians, but with other African communities in the Bronx and the African continent.”

Before the ceremony, Ghanaian national George Buadi, LAW ’15, could hardly contain his excitement. Buadi, a justice in the High Court of Ghana who is receiving his LLM, said “besides the fact that I’m graduating, it gives me an additional joy that she is the guest of honor.” 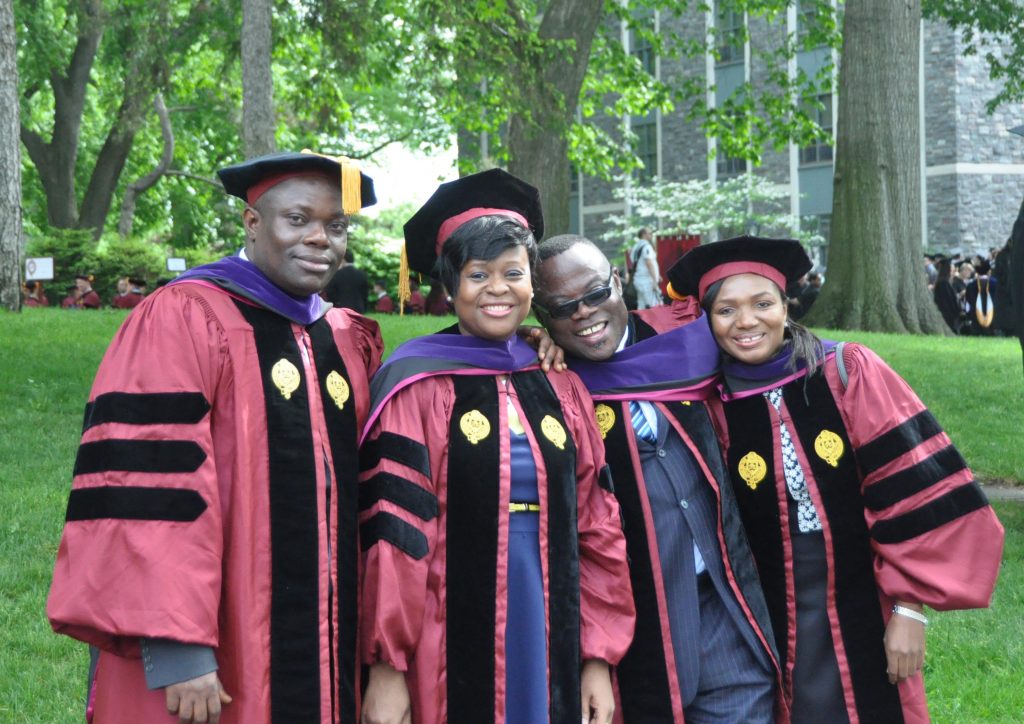 His fellow graduates, judges Alexander Tutu Osei, Afi Agbanu Kudomor, and Mariama Sammo (who comes from Mahama’s hometown of Nkoranza), said they were thrilled when they learned who would be addressing the Class of 2015.

“I thought I was dreaming,” Tutu Osei said. “Fordham is big institution, and it’s wonderful that on such a grand occasion the focus is on an African woman.”

The four students have been studying at Fordham as Vivian Leitner Global South LLM Scholars, a program that is part of an ongoing relationship between Fordham’s Leitner Center and the judiciary of Ghana.

Addressing the Class of 2015, Fordham President Joseph M. McShane, SJ, recounted the many formational experiences the graduates had shared at Fordham, from internships, to Ram Van rides, to Occupy Wall Street, to immigration reform—all part of a dynamic, fast-paced education befitting of New Yorkers.

But then, it should have been obvious from day one that this class in particular was bound for excitement, said Father McShane, recalling the then-freshmen’s rather dramatic arrival on campus during Hurricane Irene.

“As in the case of the hurricane that greeted you upon your arrival four years ago, the lessons, opportunities, and challenges that came at you from every angle did so with breathtaking speed, and never let up. Not once,” Father McShane said.

Surrounded by “immense care and rigorous challenge,” the class learned what Father McShane said are the most important lessons that the human mind and heart can learn: 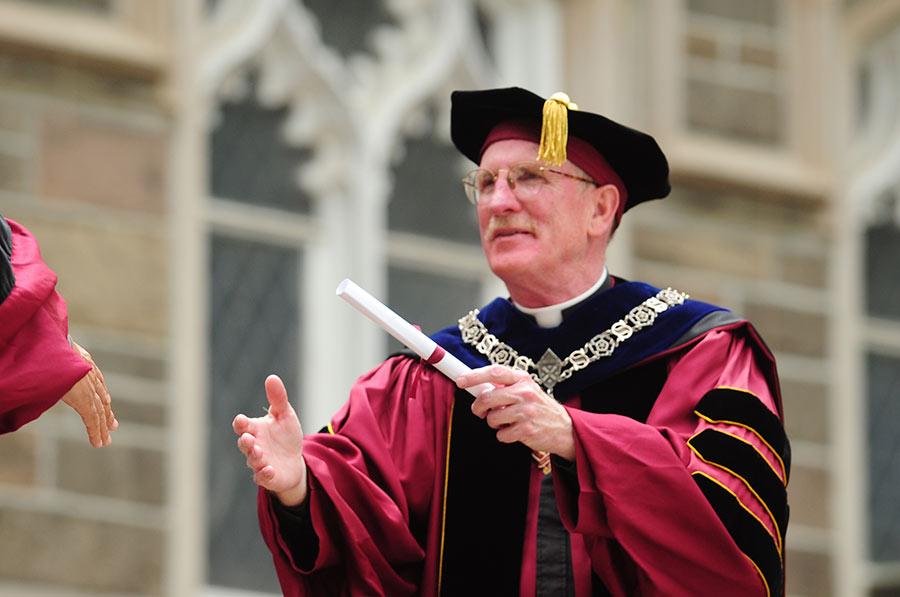 “There is no hunger like the taste of truth. There is no thirst like the desire for justice. And there is no joy like the joy that comes from the service of others,” Father McShane said.

“As life comes at you with the force of a hurricane and the speed of a New York-Fordham education, may your hearts and minds always respond with a deep and insatiable longing for more—more truth, greater wisdom, selfless service, and the glory of God.”

Fordham conferred honorary degrees on nine others, including: