WFUV’s popular Irish radio program Ceol na nGael— “music of the Irish”—celebrated its 40th anniversary with an afternoon fundraiser and concert at the New York Botanical Garden on Feb. 8.

The program, which boasts 40,000 weekly listeners, plays traditional and contemporary Irish music and features a community bulletin board segment as well as weekly news and sports from Ireland. It airs every Sunday from noon to 4 p.m. on 90.7 WFUV, Fordham’s public radio station. 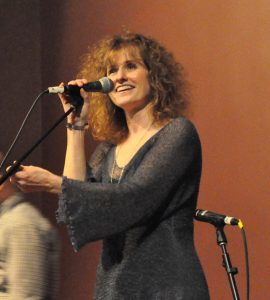 Leading Irish-American musicians came out to perform in support of the show that has supported them over the years, including fiddler Eileen Ivers; singer Cathie Ryan; seven-piece band Celtic Cross; and Dan Gurney, accordion player of New York-based quartet the Yanks. Also on hand were several Fordham alumni who once hosted the show.

Ivers said she’s grateful for the way the show connects Irish and Irish-American listeners with each other and with Ireland. “It’s like an extended family, a community. It keeps us all grounded, keeps us together.” She said the support offered by the community bulletin board is “huge.”

“In our community we’re very proud to say that we have each other’s back in tough times as well as celebratory times like today,” she said, adding that “forty years is like a blink.”

Marie Hickey, FCRH ’83, who hosted the show in the ’80s, said when she looks back she realizes what she didn’t fully understand as a 20 year old.

“To be able to host a show at such a young age that had such a far reach was an incredible experience,” said Hickey, an Emmy Award-winning journalist and New York bureau chief for the entertainment news show Extra. “It did give me a lot of confidence and through the years it’s still on my resume.”

Joseph M. McShane, S.J., president of Fordham, spoke proudly to the crowd about the Irish heritage he shares with many of the show’s listeners.

“Even as we move generationally more and more away from Ireland … there is deep within in the Irish heart the desire, in fact, the need, to reconnect with the wisdom that came from, let’s be honest, a mixture of faith and suffering, education and love. And Ceol na nGael gives us a way to do that, through the music,” he said. “That is why it’s still the case that 40,000 people tune in to Ceol na nGael every Sunday—because it wipes away miles.”

–With reporting by John Platt