Two little-known humanitarians—a Rosarian nun and a Jesuit priest—were named as co-recipients of the million-dollar annual Opus Prize on Nov. 11 in a special ceremony at Fordham.

Beatrice Chipeta, R.S., director of the Lusubilo Orphan Care Project in Malawi, Africa, and John Halligan, S.J., founder of the Working Boys’ Center (WBC) in Quito, Ecuador, jointly received the award before a standing-room-only audience of 400 people in Keating Hall on the Rose Hill campus. An overflow crowd watched the ceremony from monitors on the building’s third floor. 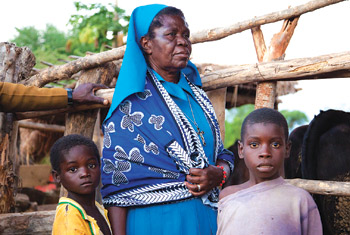 In her acceptance speech, Beatrice Chipeta, R.S., urged students to “listen to your inner inspiration, and take some action” to help others.
Photo by Michael Foley

One of the largest humanitarian awards, the Opus Prize is designed to provide a single significant infusion of resources to advance humanitarians’ work—and bring greater visibility to causes that have gone unrecognized. This year marks the first time in the Opus Prize Foundation’s seven-year history that the $1.1 million award is being split evenly between two recipients, said Don Neureuther, spokesman for the foundation.

“After several visits and a thorough review of each organization’s operations and commitment to the poor, the board determined that these two recipients were equally deserving of the top prize,” Neureuther said. “Sister Chipeta and Father Halligan embody every aspect of the Opus Prize selection criteria. We’re delighted to honor these two faith-based social entrepreneurs who have dedicated their lives to addressing some of the great social issues of our day.”

Known in Africa as the “Mother Teresa of Malawi,” Sister Chipeta began ministering to orphaned children in the 1990s in impoverished and AIDS-stricken areas with the mission of empowering every child and adult.

Sister Chipeta, who said it was the first time she has been honored, bowed to the audience upon receiving the award.

“There are so many things coming into my mind, but mostly it is joy,” she said. “This gift makes us have hope of continuing our aid.”

She urged students to “listen to your inner inspiration, and take some action” to help others.

“It comes from God,” she said, “and God never fails you.” 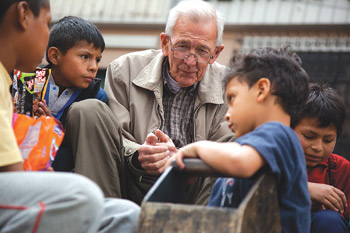 In her acceptance speech, Beatrice Chipeta, R.S., urged students to “listen to your inner inspiration, and take some action” to help others.
Photo by Michael Foley

Father Halligan, 80, began the WBC in 1964 in the attic of the centuries-old La Compania Church in the center of Quito. His simple aim was to provide lunch and spiritual inspiration to a few dozen “shoeshine boys” who worked in the streets to support their families.

Forty-six years later, the WBC operates out of three buildings spread throughout Quito and serves more than 2,000 members annually, including whole families. The center offers daycare, primary education, vocational training, special needs services and adult literacy programs to help families be self-sustaining. It is run by a team of directors, some of whom are former shoeshine boys, and enlists approximately 200 employees and 1,000 volunteers annually. It has twice been named the best technical school in the nation for its classes in carpentry, metal crafts and other trades.

Father Halligan, a native of the Bronx and graduate of Fordham Preparatory School, waved with affection to the many faces he recognized. He thanked the Jesuits for always keeping the “door open for the lower classes” and said that helped shape the path of his own life. He also encouraged students to become volunteers.

“The young volunteers make all the difference in our work, and they return from a life-changing experience in the process,” he said.

This year Fordham partnered with the foundation to find candidates from around the world. Joseph M. McShane, S.J., president of Fordham, presented each of the awardees with an honorary medal to a standing ovation.

“In Matthew 6, Jesus exhorts his heroes not to call attention to themselves, but rather to do good things—to fast, pray, and work for others, never seeking a reward,” Father McShane said. “The two extraordinary figures who we honor today have lived their lives by the advice that Jesus gives in Matthew 6.

“However, the Opus Foundation and Fordham are turning back a page of Matthew, to Matthew 5, where Jesus says, ‘You are the light of the world,’” Father McShane continued. “That is what we are doing this evening. We are taking an extraordinary woman and extraordinary man who have lived their lives according to Matthew 6, and saying that these two are worthy of being held up to give light to us all.

“For us at Fordham, this is a great grace because it enables us to hold up to our whole community the living out of the ideal that we hold up to our students all the time—that you are called, you are destined, to be men and women for others.” 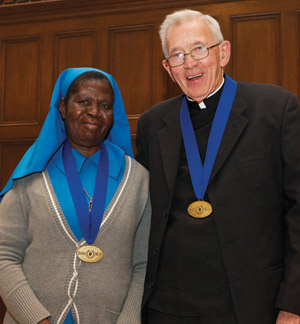 Since 2004, the Opus Prize Foundation has presented its annual award at a Catholic college or university as a means of inspiring students to do humanitarian work that is firmly rooted in religious faith. Founded by anonymous donors, its mission is to support those unsung heroes who exemplify the adage: “Give a person a fish, you have fed him for a day. Teach a person to fish, and you have fed him for a lifetime.”
The recipients were chosen from a pool of seven nominees selected by a special committee.

This year’s nominating committee members were:

• John Tognino, FCLS ’75, chairman and CEO of Pepper Financial, and chairman of Fordham’s Board of Trustees.

“Fordham literally searched the world to discover the truly saintly and extraordinary individuals who are our Opus Prize recipients this year,” Monsignor Quinn said.