skip to main content
Return to Fordham University
You are at:Home»Uncategorized»Theatre Professor and Alumnus Adds Southern Twist to a Classic Russian Play

Anton Chekov’s The Seagull is one of theater’s enduring staples, a tale of which most
theater majors are familiar.

For Michael Kimmel, FCLC ’99, it’s also the perfect inspiration for telling a raucous story about the lives and careers of Nashville’s singer-songwriters.

Songbird, a play that Kimmel wrote after he found himself disappointed by a production of a Chekov play in 2013, makes its official Off-Broadway debut tonight at the 59E59 Theater, following a week of previews. 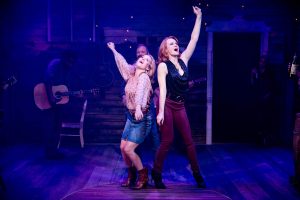 “That led me down a path of thinking about a group of people who could break hearts with an instrument or by singing a song, but couldn’t get out of the way in their own lives,” he said.

“And it all led me to The Seagull because the play is very much about talented people working through their issues.”

He settled on Nashville because of the city’s unique place in American culture, and because his collaborator Lauren Pritchard, who wrote the music and lyrics for the play, hails from Jackson, Tennessee.

The story hinges on country music star Tammy Trip’s return to the bar in which she was discovered years earlier, to help launch her son’s burgeoning songwriting career. The story is billed as a “raw and acoustic look at a community of creative persons, fueled by talent, passion, and booze.”

It debuted as a concert at Joe’s Pub in July 2014 and again this past June; tonight’s performance is its first presentation as a full production.

“If you were to tell the story of The Seagull and leave out the Russian aspect, in some ways it starts to sound like a country song,” Kimmel said.

“In Chekhov’s writing, you can see something like the Gothic South that we know, which is an exquisite misery that the [writers]mine for a lot of humor.”

He has dubbed the play a love letter to creative people. 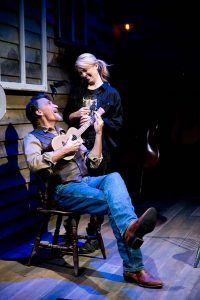 “When the characters in out show break into song, the issues that are surrounding them tend to melt away, and the characters communally find great happiness and joy in the music of the world. That’s how I feel when I work on a show,” he said.

Kimmel has taught at Fordham as an adjunct professor since 2008. This semester he’s teaching Invitation to Theatre, for non-theater majors. Since graduating, he’s found success in both writing and directing. His play The Last Goodbye, an adaptation of Romeo and Juliet with the music of Jeff Buckley, debuted in 2008 and was recently performed at The Old Globe Theater in San Diego, featuring two-time Tony nominee Alex Tim.

He’s also working on Todd and Mitzy, a play that touches on the drama of miscarriages and stillborn children.

“They really instilled in me a love for the process,” he said. “It has served me well since I left.”