skip to main content
Return to Fordham University
You are at:Home»Uncategorized»Study Reveals Reasons for Parents’ Skepticism on Vaccinating Youngest Against COVID

After years of studies and trials, on June 17 the F.D.A. authorized the Pfizer-BioNTech and Moderna COVID-19 vaccines for emergency use in children ages 6 months to 4 years.

But if health authorities want to convince parents to vaccinate children in this age group against COVID, they’re going to have to acknowledge that this isn’t 2020 anymore, said Celia Fisher, Ph.D.

“One of the things we found was that the resistant and unsure parents are saying, ‘Look, the vaccine doesn’t work, because people who’ve been vaccinated are getting COVID. So why should I give it to my child?” said Fisher, the Marie Ward Doty University Chair in Ethics and director of Fordham’s Center for Ethics Education.

Just as the center did last fall, when the FDA authorized the use of vaccines for 5- to 11-year-olds, Fisher, who collaborated with Fordham graduate students Elise Bragard, Rimah Jaber, and Alliyah Gray, conducted a national survey to try to illuminate the reasons for parental vaccine resistance and hesitancy. 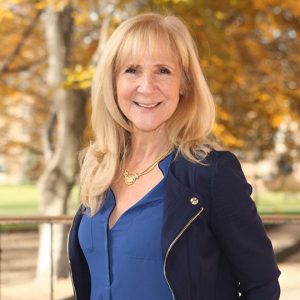 For the study COVID-19 Vaccine Hesitancy Among Parents of Children Under Five Years in the United States, Fisher, and her team collected data in April and May 2022, a month prior to the vaccine approval. They partnered with the survey aggregator Qualtics XM, and after receiving 1,337 responses to a call to participate, they settled on 411 English-speaking self-identified Hispanic and non-Hispanic Asian, Black, and white female guardians who were 21 or older and had children 1 to 4 years old. The results were published this month in the journal Vaccines.

Their reasons were revealed in an open-ended section of questioning, where participants could go into greater depth about their concerns. One was the fact that the COVID BA.5 Omicron subvariant, which has become the dominant strain of the virus, is much more capable of infecting healthy people who have been vaccinated and boosted. That meant that some of the respondents had already had experience with infections, and those experiences did not lead them to automatically accept the need for vaccinations.

One mother, whose answer was classified in the study as “unsure,” wrote the following:
“The children had it, including my three-year-old, and the symptoms for him were very minor
to none. We actually had it twice and both times his symptoms were pretty minor. I also feel
like they should have some immunity against the virus now and getting shots every few months, without enough years gone by to see the side effects of the shot, just isn’t an option for us.”

Another, who was classified as “accepting,” still had safety concerns:
“I’m afraid because the words “emergency approval” kind of scares me especially when it comes to my children. I have a 3-year-old and an 8-month-old. Emergency makes it seem like it wasn’t tested as long as it needs to show proper results. However, most likely I will vaccinate my children”

Another concern that many parents also cited is the speed at which the vaccine was developed and approved. Relatedly, Fisher said it’s fair for parents to ask how many children have severe reactions to the vaccines, and in fact, the answer would allay their concerns.

“I read the data, and the data says that in fact, the vaccine has fewer side effects for young children than it does for adults. But you know, how many parents are going to read the research? The problem is that what’s effective about the vaccine is that those of us who are vaccinated are not hospitalized, and we don’t die when we get COVID. But that doesn’t necessarily get through to all parents,” Fisher said.

“Another thing is that a lot more parents have been vaccinated themselves, and have had these horrible, severe flu-like reactions [after vaccination]. They don’t want their young child to experience that.”

Compounding the problem is the fact that parents are not hearing these kinds of concerns addressed by authorities such as the Centers for Disease Control, Fisher said.

“You don’t hear on the ads that are going around that if you take the vaccine, you may get the new variant of COVID, but you won’t be hospitalized, and you won’t die,” she said.

“Nobody is addressing parents’ real concerns. They’re just saying, ‘Take the vaccine.’ And then parents are seeing that people who take the vaccine are getting COVID anyway.”

The need to recalibrate messaging on vaccines is taking on more importance, as recent statistics indicate that a year after vaccines became available to children between 5 and 11, fewer than 40 percent of that population has received two shots of the COVID vaccine, she said.

Research has found that children in that age range are more likely to suffer long-term side effects from COVID than from vaccines, and even though children who are infected generally suffer less severe symptoms than adults, they’re not immune. In rare instances, their symptoms can be very severe, and that shouldn’t be discounted by a parent who’s trying to decide whether to vaccinate or not.

But that can only be done if parents’ concerns are addressed, Fisher said.

“There is this very small percentage of parents that are resistant for resistance’s sake, whereas there are others who are just either misinformed or are highly concerned,” she said.

“What I’m hoping is that, because we did these narratives that allowed parents to speak in their own voice, it will alert pediatricians who are talking to parents to ask them what their concerns are, rather than just tell them, ‘The vaccine’s safe, your child should take it.’ That’s not going to work.”