On Jan. 14, when members of New Yorkers Against Gun Violence (NYAGV) showed up in Albany to bring attention to a proposed gun law, they were wearing T-shirts bearing the phrase “Locked and Unloaded.” 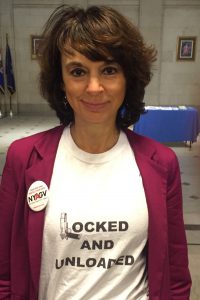 They have Janae Sepulveda, a student in Fordham’s Graduate School of Social Service (GSS), to thank for it.

Sepulveda came up with the phrase last fall while creating a class campaign for her Social Policy II: Policy Practice and Human Rights Advocacy course. She and three classmates—Jonathan Wilson, Melinda Lehman, and Krista Amato—focused on gun safety. They set their sights on supporting Nicholas’s Law, proposed state legislation dedicated to Nicholas Naumkin, who was killed in December 2010 by a 12-year-old friend playing with a handgun he found in his father’s dresser. The law would require gun owners to either secure their weapons in a safe or render them unable to be fired whenever the gun is out of their possession.

The safe-storage bill passed the Democrat-led State Assembly this year, but the Republican-led Senate has refused to pass it. This defied explanation for Sepulveda, who noted that an average of two children a week in the state are killed in unintentional shootings.

“I have a 3-year-old and a 5-month-old, and it never dawned on me to ask before play dates, ‘Do you have guns in the house, and are they locked up?’ You just have to be so vigilant, in the times we’re living in, about guns,” she said.

When the GSS students first met in September, Sepulveda said she already knew she wanted to devise a brand approach to advocacy against gun violence—something symbolic, like the pink ribbon that has become synonymous with breast cancer research.

“First we had ‘Safe Storage Saves Lives’ on the back of the T-shirts,” she said. “Then I thought of how guns usually are described by the military as ‘locked and loaded.’ And I thought, ‘How about ‘Locked and Unloaded?’” They adopted the phrase as their slogan.

Leah Gunn Barrett, executive director of NYAGV, found out about the students’ T-shirt slogan, which debuted at a poster presentation at Fordham’s Westchester campus last semester. She said it perfectly captures the intent of Nicholas’s Law, and asked if NYAGV could use it in their campaigns.

Barrett doesn’t expect the Senate to pass the law this year, but NYAGV is using the slogan to push similar legislation locally. A gun safety bill went into effect in Albany on Jan. 1, and NYAGV is lobbying in Schenectady, Troy, and Newburgh.

“‘Locked and Unloaded’ is really what we want gun owners to do with their guns when they’re not in their immediate possession or control—not just to keep them away from children who might shoot each other or bring a loaded gun to school, but also to prevent suicides, domestic violence, and gun thefts,” she said.

“We lock up other valuables in our home … [so]we need to make sure our firearms—weapons designed to kill—are too.”

GSS student Melinda Lehman said that the political climate around guns has become so toxic that opponents of regulation have adopted a “Give an inch, they’ll take a mile” attitude. So when the classmates chose the topic, they agreed their message should emphasize safety.

“We’re not trying to amend the U.S. Constitution or get rid of the right to bear arms. That wasn’t our goal,” said Lehman, who said she is acting on behalf of her children’s safety after having grown up in a household where there were loaded guns.

“Guns aren’t evil, but there’s a responsible way to own them. We’ve gotten to a point in this country where too many innocent people are getting hurt.” (Featured photo: Erich Ferdinand)