skip to main content
Return to Fordham University
You are at:Home»Uncategorized»Professor Teaches Business Leaders to Manage at the Edge of Chaos 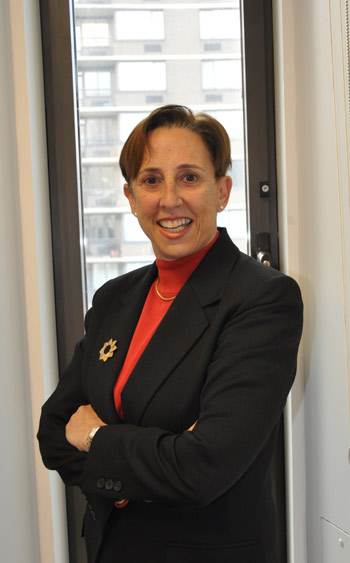 Through her research into chaos theory, Toby Tetenbaum, Ph.D., realized the need for an applied master’s degree program for human resources and organizational development professionals.
Photo by Gina Vergel

In the presently unpredictable business environment, the last thing managers should do is make waves, right?

Wrong, said Toby Tetenbaum, Ph.D., who has been researching and preaching the benefits of chaos theory for the past decade.

A professor in the Graduate School of Education with a background in social psychology and psychometrics, Tetenbaum stumbled upon the chaos principle when her husband suggested a book on the scientific theory and its spinoff, complexity theory.

Digging deeper into the topic, Tetenbaum asked herself, “Why not tie the paradigm to organizations and how they deal with current and future change?”

She was onto something. Still, she found that using chaos as a paradigm for large-scale change is a hard sell for managers.

“They resist it because they think of chaos as Christmas Eve—everyone in the stores, reaching and trampling over each other to get those gifts on sale,” Tetenbaum said. “But it’s not like that all. Chaos has order. That’s what’s so neat about it.”

Scientists have described chaos as a complex, unpredictable and orderly disorder in which patterns of behavior unfold in irregular but recognizable forms. The focus of chaos is the web of feedback loops present in every system. In some systems, the feedback loops are linear. In others, they are nonlinear. Businesses, because they are made up of people and are highly complex, are nonlinear feedback systems, Tetenbaum said.

It’s the perfect way for organizations to run in today’s nonlinear world of lightning-fast technology, increased globalization and competition, she said.

“You want to think of managing people on a tightrope. You want to disturb people in the organization enough to move forward, to create, to innovate, to try things, to risk without having the rope swing so much that they fall off. On the other hand, if you don’t move them, they are stuck and nothing will happen,” she said.

It’s a far cry from the Newtonian worldview that led to the top-down organizational structures that began during the Industrial Revolution and still hold sway today. Conversely, these are the guiding principles of chaos management:

• Forget predictability—there is no map

• Rely on the collective intelligence of people

• Work on the technical but revel in the adaptive

• Manage at the edge of chaos

“Leaders like the theory behind chaos, but then they say, ‘Not me,’” Tetenbaum said. “Many don’t have the gumption to try it because it’s a high-risk leadership model.”

Through her consulting work, Tetenbaum has lent her expertise to hundreds of managers in organizations such as Exxon, General Electric and Fidelity Investments, as well as local school districts.

“The old motto in the traditional organization was, ‘Keep everything copacetic. Keep things stable and don’t come to me with problems,’” Tetenbaum said. “Trying to get people who lead other people to use the chaos theory in this era of accountability—it scares them. They say, ‘I’d rather play it safe if everyone is watching me than to take the risk.’ Because on the risk side, you have to experiment and rarely do things work the first time. Some things you try aren’t going to work and if failure is not acceptable in your organization, you’re never going to move.”

One of the most exemplary organizations in respect to chaos theory, Tetenbaum found, was IDEO, a design and innovation consulting firm that now markets its innovation process.

“They say, ‘Fail faster, succeed sooner.’ It’s an understanding that you are going to fail, but fail and learn. If you don’t do anything, then you’ll go nowhere,” she said.

However, Tetenbaum added, the tendency of chaos theory to rely on self-organization might be why it is so hard for some managers to swallow.

“Chaos is self-organizing; trust is part of that and hiring good people is another,” she said. “Part of managers’ resistance is, ‘I can’t wait for people to self-organize.’ Well, the truth is, they do if you let them. If you have the right people in the right positions, they self-organize.”

Tetenbaum’s research led her to an innovation—the need for an applied master’s program at Fordham for human resources and organizational development professionals.

“I started to talk to human resource people in business—they are the ones who hire for training and organizational development—and realized they had no background in these areas,” she said. “It was as if human resources was a dumping ground for personnel. It was very frustrating.”

With the help of a human resources advisory board made up of top HR professionals from several corporations, Tetenbaum built the program, which continues to flourish.

“There is a big push for talent management these days. If every company is talking about recruiting the best people and training them, then you have to pay much more attention to HR,” she said. “Usually, recruitment is an entry-level position. But if you’re preaching talent management, then that 20-year-old you put in recruitment may not know how to read a resume the right way.

“Fordham’s human resources master’s program is among the few that focuses solely on people in the organization, be it their behavior, their change efforts or the culture they establish,” she added.

“Not only are we people-focused in how they are in a system, but we’re futuristic. That’s where my chaos theory comes into this program. The first course sets the stage for understanding that we’re preparing for 2020, not for 2010.”