skip to main content
Return to Fordham University
You are at:Home»Inside Fordham»North African Islamic Nations Struggle for a Democratic Identity 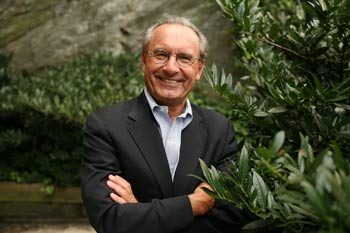 John Entelis, Ph.D., says that democracy can flourish in the Middle East once national identities have been established.
Photo by Chris Taggart

When it comes to middle eastern politics, the North African Islamic “Maghreb” nations of Algeria, Morocco and Tunisia lie slightly off the radar of the American media. Yet, like Iraq, all three nations are in an uphill struggle to find their path toward democracy, according to John Entelis, Ph.D.

Entelis, professor of political science and director of Fordham’s Middle East Studies program, has watched the political landscape of North Africa and, specifically, the activities of the nations’ indigenous Islamic populist movements, for nearly 40 years.

“Islamic movements have been extremely important in North Africa,” said Entelis, who has lived and taught in Egypt, Morocco, Algeria, Tunisia, Lebanon and Saudi Arabia. “They have existed for a relatively long period of time, but have only become activist political movements in the ’70s, ’80s and beyond.”

But when Entelis refers to Islamic movements, he does not mean radical, terrorist fronts that many Americans think of when they hear the word “Islam.” They are, rather, non-violent, peaceful and mostly democratic indigenous movements attempting to participate in largely autocratic political systems that have maintained authority since the former French colonies gained independence in the 1960s. In all three nations, he said, vehicles for secular political movements either don’t exist or are not recognized by the Muslim population as effective, so “Islam” means many things to many groups.

“Islam is very open ended,” said Entelis. “In North Africa, many Islamic groups make no delineation between church and state . . . so there are different forms of Islamic expression. One is the purely religious. One is overtly political. Then you have the radical expression, like Osama Bin Laden and Al Qaida, or the Wahabism coming out of Saudi Arabia.

“The movements I study in North Africa have viewed Islam as a kind of expression of an authenticity that is no longer being maintained by the ruling elite, who they think of as overly secular, overly western, overly corrupt and overly authoritarian,” he explained. “The Islamic movements, such as the Islamic Salvation Front (FIS), resonate in a direct way with a lot of people—which makes them truly populist. They’re led by individuals who are pious, but who in their lifestyle are viewed as uncorrupt, and interested in the welfare of the people.”

In a recent article in North Africa: Politics, Region and the Limits of Transformation (Routledge, 2008), Entelis outlined the ongoing status of each autocratic nation: Tunisia re-elected pro-Western president Zine al-Abidine Ben Ali to a fourth term in 2004 following a “predetermined” election (Ben Ali took 95 percent of the vote). Morocco, which is experiencing a wave of Islamic militancy under King Mohammad VI, has resorted to arbitrary arrest, torture and unfair trials. And Algeria, which fares slightly better on human rights under President Abdelaziz Bouteflika, stripped news organizations of their accreditation (including Al Jazeera) when they reported on terrorist activity.

All three nations, Entelis said, are pro-western and receive aid from the United States. They also depend on military police, or mukhabarat, to protect the ruling classes, something that has led to a crackdown on legitimate channels for political expression against the government.

In addition, said Entelis, the post-9/11 climate of global anti-Islamism has helped Al Qaida to recruit and organize in North Africa.

“Today, more and more North Africans are giving up on the idea of legitimate political change and are engaging in, or supporting terrorist activity,” Entelis said. “And the protective regimes are as much to blame as anyone else.”

The U.S. is caught in a conflict, Entelis said. “We want to see democracy, liberty and freedoms emerge in these societies, but we do not want it to be at the expense of the friendly governments in power, fearing what might replace them.

“But obviously,” Entelis added of the Iraq quagmire, “invading a country to try to impose democracy doesn’t work.”

Like Iraq, Entelis said, the Islamic nations in North Africa have a history of colonial rule followed by dictatorships and unrest. It is his belief that the most effective way to eradicate terrorism in the region is to democratize the authoritarian governments.

“Many middle eastern Arab nations have never been given the chance to identify themselves and to express that identity through legitimate political processes. For example, the sense of ‘what is an Iraqi’ has not yet been resolved,” he said. “You first need to create a sense of national identity upon which you can build a state, which can then become democratic.

“Such a path is not unique to the Middle East,” Entelis continued. “Look at our own history. How was the United States formed? Didn’t we have a civil war? We were that close to being two separate nation states ourselves.”

Lasting political change, he added, has to come from the bottom up. “And it has to have leadership at the top that is responsive to the people’s wishes.

“Right now, neither of those things applies to most of the Middle East.”

Lastly, Entelis, who is occasionally called upon to brief the Department of State on the activities of various political movements in the region, emphasized the dangers of viewing the whole of Islam as a ‘militant’ Islam.

“A lot of the grassroots Islamic groups—including Hamas in Palestine and Hezbollah in Lebanon—have a legitimate appeal and a large base. Whether we like it or not, they are populist movements that men, women and children support.”