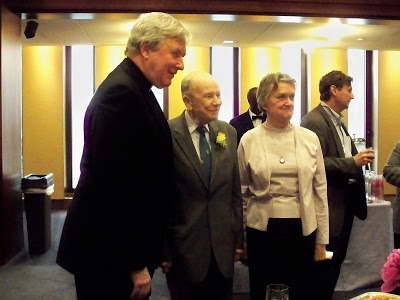 Before Fordham had a Lincoln Center campus, it had John Roche, Ph.D.

Roche, a professor of history, arrived at Fordham’s Woolworth Building as a freshman in 1942 and, after service in World War II, graduated in 1948 from the University’s City Hall Division, which had moved to 302 Broadway.

While earning his Ph.D. from Columbia University, he began teaching at Fordham in February 1951. Although he retired in 1995, he continued to teach in FCLC, FCLS, and the College at 60.

On Wednesday, May 12, Fordham acknowledged John’s 59 ½ years of teaching here at a retirement party thrown by colleagues and friends in the 12th Floor Lounge at the Lowenstein Center on the Lincoln Center campus.

Robert R. Grimes, S.J., Dean of Fordham College at Lincoln Center, took the occasion to go back through Roche’s personnel file and read a citation that had been written by Anne Mannion, Ph.D., associate professor of history, on the occasion of John’s first Bene Merenti award for 20 years of teaching.

Mannion, who reminisced about first meeting Roche as a student of his at 302 Broadway, said that even though she grew up in Long Island, living by railroad tracks made her feel that she, like Roche, a lifelong Brooklyn resident, was a city kid. As a fellow historian, she noted that they share a special sense of time and place.

“When I go through life, I count my blessings, and when I look at John, I count them twice,” she said.

Roche said he relished being able to see the University grow and change as it added campuses in Manhattan and integrated women into its student body. He also served on the first faculty senate.

“One can say one is fortunate to live and work in interesting times, and that’s certainly been true of these years at Fordham. Really, in terms of the overall history of the institution, one would be hard-pressed to find another period in its long history in which so many significant changes and elements of growth have occurred,” he said.

“I’ve had a happy time at Fordham. There have been a few rough passages, of course, over so many years. But all in all, thanks in a great part to my association with you, it’s been a very good experience, indeed.”