skip to main content
Return to Fordham University
You are at:Home»Living the Mission»Lessons and Impacts of Ebola Outbreak Examined 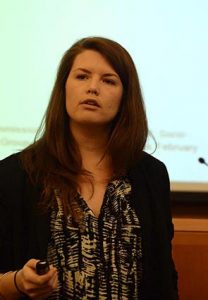 Last year’s Ebola outbreak may have faded from the headlines, but its economic impacts in West Africa and the troubling questions it raised about response efforts are far from resolved, according to panelists who have visited the African continent.

“We had more than 10,000 people die of Ebola, and Ebola should really be one of the easiest diseases to control,” said Dr. Alexander van Tulleken, the Helen Hamlyn Senior Fellow at Fordham’s Institute of International Humanitarian Affairs.

He was one three panelists at the April 24 event, “’Post-Ebola’ West Africa: Humanitarian Impact, Challenges, and Opportunities.” Van Tulleken described “an international system of pandemic response that doesn’t work,” noting that each Ebola case only generates about one other.

“The virus is not good at transmitting itself,” he said. “When you have one case in a Dallas hospital that led to several other cases of infected nurses, you then see both the lack of competence and the fear that even if we control Ebola—which we sort of managed to do—that a disease with a higher (transmissibility) like bird flu would really threaten the world economy and human life in a very significant way.”

Last year, the political risks and the risks of transmitting Ebola in various places around the world were not centrally managed, he said. The Obama administration’s Ebola “czar” was better qualified to address political risk than the “very small amounts of widespread risk” posed by the outbreak, he said.

The outbreak took a harsh toll on commerce and agriculture in Guinea, Sierra Leone, and Liberia, said panelist Ellie Frazier, a master’s candidate in the International Political Economy and Development program at Fordham. To illustrate, she pointed to the 2.8 percent drop in U.S. economic growth following the 2008 financial crisis, compared to an Ebola-related drop of 23 percent in Sierra Leone.

Also, response efforts call attention to “governance gaps” and poor access to justice-related services, she said, noting the barriers to women exercising their legal right to own and inherit land.

“You can come in and do an … economic recovery program and disperse seeds, but if your recipients don’t have secure access to land, where are those seeds going to go?”

She also emphasized the need to examine the conditions that allowed Ebola to spread.

He described his organization’s efforts to promote hand-washing—important because of the country’s lack of running water and a culture that favors touching as a means of expression. Also important was having burial teams dispose of corpses in a more dignified way, rather than simply enclosing them in bags and heaving them into trucks.

The piling of the still-contagious bodies on trucks “created a lot of risk because a lot of people were hiding at night, trying to bury their loved ones, and that created a lot of infection,” he said.

Van Tulleken said Ebola’s “high imaginability factor” was played upon in the news via graphic images, to the detriment of more useful information such as the need for public support of efforts to manage the epidemic in West Africa.