skip to main content
Return to Fordham University
You are at:Home»Inside Fordham»Fordham Earns a Dozen Fulbrights 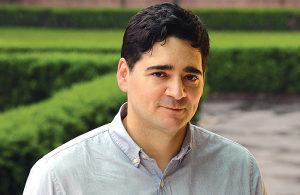 Pedro Cameselle, a doctoral candidate in history, will travel to Uruguay to research the country’s relations with the United States during the late 1930s and early 1940s.
Photo by Tom Stoelker

As of June 18, five students received English Teaching Assistants (ETA), six students earned research study grants, and one received the Fulbright-Clinton Fellowship. The 12 winners came from a pool of 53 Fordham applicants, a yield rate of 23 percent.

Rebecca Stark-Gendrano, Ph.D., Fulbright Fellowship coordinator in the University’s Campion Institute and Office of Prestigious Scholarships, said Fordham’s success was due in part to an increase in its number of applicants, up from 43 last year.

Nationally, 1,838 winners were selected for Fulrights from approximately 9,430 applicants.

“It was an excellent year. I’m really happy that we had more students going for the award this year than we did last year,” she said. She said Fordham has been working with students a bit earlier in the process, helping students in their sophomore year get prepared to apply.

In addition to written applications, candidates undergo on-campus interviews with a campus review committee; those applying to non-English-speaking countries must also complete an interview in their country’s language to prove a certain level of proficiency.

Candidates then advance to the national screening committee and are notified during the winter whether they will be moving on to the final round. The host countries make the final decision by late spring or early summer.

Stark-Gendrano said the ideal Fulbright candidate is not necessarily the one with the highest G.P.A.

“It sounds cliché, but they really have to have a clear passion for what it is they’re doing. If in talking with students, I can see that passion for their project, then I get really excited for their chances,” she said.

For Pedro Cameselle, a history doctoral candidate in the Graduate School of Arts and Sciences who is traveling to Uruguay, the Fulbright is an opportunity to revisit his native country, from which he emigrated when he was ten.

The country played a role in the opening years of World War II in the late 1930s, and U.S. President Franklin Delano Roosevelt was very popular there. Today, his name can be found on streets, schools, monuments, and a nature preserve. In spite of that, the United States failed to convince Uruguay’s government to allow two U.S. military bases there. The paradox interests Cameselle.

“I realized that no one is writing about this, and I looked more into it, and found all these fascinating events that took place in Uruguay that captured U.S. attention,” he said.

“My big goal in trying to understand U.S.-Uruguay relations during this period is to generate a more complete view of U.S. and Latin American relations,” he said.

• Pedro Cameselle, GSAS student, to Uruguay for “The Forgotten Neighbor: The Challenge of Uruguay-U.S. Relations during the FDR Era”

• Daniel Davies, LAW ’14, to the Netherlands for “Law and Politics of International Security”

• Taylor Jacob, FCRH ’14, to the United Kingdom for “Conscientious Objection and Christian Obligation in Women’s Healthcare”

• Henrique DeAgular Valim, FCLC ’14, to Germany, for “The Role of the Plant Circadian Clock in Mediating Competition within Monocultures,” and