Fordham’s Graduate School of Social Service’s (GSS) Institute for Women and Girls hosted a program that highlighted the importance of education for girls on a national and global level. 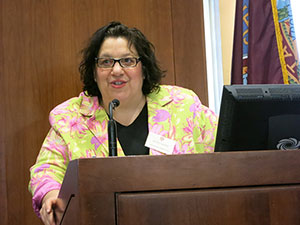 Rachelle Kammer, Ph.D, director of the institute and clinical associate professor at GSS, emphasized the interconnectedness of education and socioeconomic issues.

“Providing girls with an extra year of schooling beyond the average [schooling]can boost the eventual wages by 20 percent,” said Kammer.

On a broader scope, an additional year of primary schooling can also improve the average global economy 10 percent.

Maria Pia Belloni Mignatti, Ph.D., a member of New York University’s Global Women’s Initiative, said that countries with greater gender equality in education tend to have higher economic growth. Although there are many more girls in school internationally today than ever, those pockets in the world lacking childhood education have become a hidden crisis.

“Education does not expire when conflict occurs,” said Mignatti.

Meeta Gandhi, board member for Children’s Lovecastle Trust (CLT), described her organization’s transition from one that delivered milk to the children of Indian laborers to an organization that provides resources for innovative methods of teaching, such as tailored online software and mentor-driven learning. Today, the non-governmental organization is a sustainable educational delivery service to India’s government-run schools.

Even so, Ghandi stressed that “people can’t learn unless they are fed. We must alleviate psychosocial stressors before we can teach.”

“The teachers are local women and they put their tiny paychecks back into the school,” said Sarabia of the local initiative, which also provides a meal for the students at school. “It is the truest sense of community.”

Radin’s organization offers a 12-week program that dovetails societal issues and animal welfare, giving middleschool girls the opportunity to be involved in animal rescue. In caring for animals, the girls learn about their needs and how to advocate for those with no voices, said Radin.

“Early influence shapes the perception of power, and how women embrace and use it,” said Radin.