skip to main content
Return to Fordham University
You are at:Home»Fordham Magazine»Alumni News»Cancer Survivor Invents T-Shirts with a Purpose

Editor’s note: Alex Niles died in April 2015. His spirit lives on in his family, his enormous network of friends, and CureWear, which is is still going strong.

Alex Niles, GBA ’11, sipped a green smoothie in his neighborhood West Village cafe, happy to talk about his new normal. The young entrepreneur has a lot on his plate these days: He’s running an apparel business, writing a column for the Huffington Post, and keeping medical appointments.

It’s a very different schedule than he was maintaining just over a year ago. In 2013, Niles was “living life as any 30-year-old would”—working, traveling, and staying out late with friends. A former Division 1 college soccer player, he was a healthy, active guy. But that summer, Niles began having stomach pains. And by September of that year, he’d been diagnosed with stage 4 gastric cancer.

“You have your foundation, your routine, but then something happens and you have to hit pause,” he said.

In October he shaved his head in preparation for his 21st cycle of chemotherapy. Now he’s doing so well that his medical team said he could take an indefinite break from treatments.

“You have your foundation, your routine, but then something happens and you have to hit pause.”

“All the doctors told me I wouldn’t be here, but I’m here,” he said. “They call me Superman where I get treated.” He’s adopted a plant-based diet and a “we-got-this” attitude. Still, he stresses that there is no cure for his disease.

Living with cancer has thrown Niles into a new routine—not only as a patient but as the founder and CEO of CureWear, an apparel brand for cancer patients and their supporters.

He developed the idea for the business during his lengthy chemotherapy treatments. Each time, he’d have to remove his shirt so caregivers could access the medical port implanted in his chest to deliver the chemo drugs.

“I just didn’t want to do that. It was very belittling,” he said, and especially tough on women and little kids. He could have worn a button-down shirt, he admits. “But I was cold. It was the coldest winter ever. And I wanted to wear what I wanted to wear. 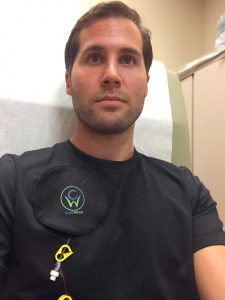 “So what I did was I literally cut a hole in my shirt and safety pinned it afterward. And I said, hold on a second. Here’s a very simple concept that actually has a very big impact on a tough situation.”

And with that, the idea for CureWear’s patient shirt was hatched. The black T-shirt features a port-accessibility patch that opens and closes with Velcro.

“It makes me feel more comfortable. My parents, my family, and friends who are there, they see me a little more comfortable. It’s even a little less awkward for the nurses,” Niles said. “When I first brought in samples to my oncology team, everyone cried, they were so happy.”

After his first rounds of treatment were successful, Niles spent the spring sourcing fabrics and working out other production details for CureWear. In August, he launched a Kickstarter campaign with a video he produced with friends on a West Village rooftop. The campaign raised $50,000, exceeding his goal by $20,000. With the contributions came several shirt orders. He has just started making his first deliveries.

Niles said he’s always had the entrepreneurial “itch,” but he sharpened his business skills at Fordham.

“[My professors] allowed me to realize my strengths as well as what I had to work harder on,” he said. “And I walked out with some really good friends.”

David Soberman, GBA ’11, who appears in the Kickstarter video, is one of Niles’ former Fordham MBA classmates. The two speak almost daily.

“I think the Kickstarter way allowed him to ease into the process,” he said. “It allowed him to take advantage of his social networks,” which Soberman said are vast. They include many loyal friends from Fordham; from Drexel University, where Niles was a scholarship soccer player; and from other walks of life.

Soberman said that throughout his treatment, Niles was always concerned about how his friends and family were handing the news of his illness and how much they were doing to support him.

To that end, CureWear also makes shirts for supporters—short-sleeve, high-quality black athletic tees with pink, blue, or green trim. They offer supporters a way to help: Niles reinvests 10 percent of the company’s proceeds in making shirts for patients, some of which he plans to give away to hospitals and other cancer organizations. 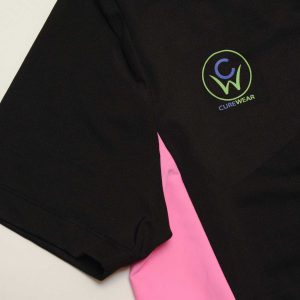 When he’s not busy running his business, Niles brings his sunny outlook to his online followers. In addition to his own blog, Smiles for Niles, he’s got a regular column with the Huffington Post and has been published in The New York Times and Psychology Today. In his Times piece, “An Athlete Tackles Cancer,” he wrote about mentally preparing for chemo treatments: “I picture myself crossing that line, snapping the ribbon of victory, and celebrating with exuberance.”

Niles said the cancer is always on his mind. “It’s a very heavy backpack to wear.”

Writing was a way to heal at first. “But it very quickly turned into what I realized was a source of strength for people. People started reaching out to me and saying thank you.” And he said the same about CureWear. “It’s been an incredibly positive distraction for me. And we’re really making an impact.

“The biggest lesson for me is that time is the most valuable commodity, and I have all intentions to make the most of mine.”