Since 2013, the Graduate School of Social Service (GSS) and the School of Professional and Continuing Studies (PCS) have been in collaborative partnership with China Youth University (CYU) in Beijing.

This past January, GSS formed an additional partnership with the Beijing University of Technology.

Under the new partnership, students from CYU will earn a bachelor’s in social work from Fordham and, should 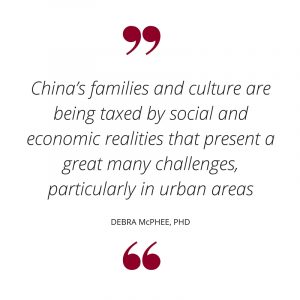 they choose, would also continue on for a master’s. Fordham students get a summertime opportunity in China where they can choose between two three-credit courses while becoming familiar with the culture.

“It’s about bringing Chinese students to experience one of the most vibrant cities in the world and learn professional skills at Fordham that they can bring back home to have a positive effect,” Debra McPhee, PhD, dean of GSS.

“Like anywhere in the world, China’s families and culture are being taxed by social and economic realities that present a great many challenges, particularly in urban areas,” said McPhee.

Over the next 20 years China will need to employ approximately 2 million social workers to deal with the needs of a massive population and an “explosion in urban economy,” she said.

Koch, who taught at the last two summer sessions at CYU, said that while Beijing’s population of 21 million may impress, it pales in comparison to the megacity that the government plans to link together with bullet trains over the next decades.

“Beijing will be at the center of 130 million people, and that will affect how services are delivered,” he said. “That environment will require a different kind of practitioner. We’re helping to develop that.”

“We want to help China increase its effectiveness in helping people,” he said. “And in site visits with CYU and Fordham students, we really see what’s happening on the ground; it’s not just the 30,000-foot view.”

Koch said the local governments are far more forthcoming than in the past in revealing and confronting issues such as HIV, undersupervised migrant youth, and care for the elderly. Such a shift will be beneficial, especially on the growing professionalization of social work.

“What we’re seeing in the universities is an attentiveness to what social work can give them, something which in the past they couldn’t utilize,” he said.

“In these kind of partnerships there’s always a benefit on both sides,” said McPhee. “It’s about building bridges.”

There will be several information sessions in March for Fordham students interested in taking a three credit course in Beijing. For more information contact David Koch at koch@fordham.edu.