skip to main content
Return to Fordham University
You are at:Home»Colleges and Schools»Fordham College at Rose Hill»Biologist Finds Glimmer of Hope for Dying Bat Species 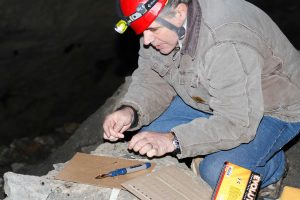 White-nose syndrome (WNS) is an exceedingly efficient killer.  The disease, which first appeared in New York during 2006, occurs when the fungus Pseudogymnoascus destructans infects the skin of hibernating bats, causing them to wake up prematurely and deplete body fat reserves that they need to survive through the winter.  The U.S. Fish and Wildlife Service estimates that WNS has killed more than 5.5 million bats in the United States and Canada.

In “The Resistance of a North American Bat Species (Eptesicus fuscus) to White-Nose Syndrome (WNS),” published this week in the journal Plos One, Frank, an associate professor of biology, demonstrates definitively that for reasons that are still unclear, Eptesicus fuscus is not all that susceptible to WNS.

To do his research, Frank visited three big brown bat hibernation sites in upstate New York over a two-year period.  His team used radio telemetry to measure the torpor patterns of 26 bats hibernating in abandoned mines, and measured the changes in body fat content as well. While a large percentage of the population of little brown bats (Myotis lucifugus) died from WNS during this period, big brown bats showed no signs of infection at all. 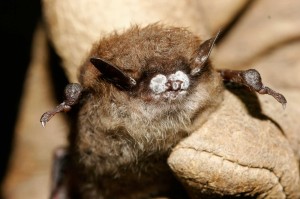 The big brown bat has long been listed on the Fish and Wildlife Service’s website, along with six other species, as one that is affected by WNS.

Frank says that learning how it resists the disease will help scientists come up with a remedy for other bats.

“The only other species of bat that’s known to be resistant to white nose syndrome are European bats.  Having found a North American species that’s resistant makes the struggle for finding a treatment a lot easier  now,” he said.

“It opens up a huge door to further study and further insights into how this disease is killing susceptible species.”

The study was funded through grants from the National Science Foundation and from Fordham. 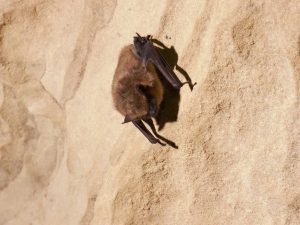 In his paper, Frank cites two previous  studies on the big brown bat’s mortality that he says contradicted one another.   One of them, a winter study conducted at 42 different sites over a 10-year period, found an average decrease of 40 percent in population size. The other, conducted during the summer at just one location, found no significant change in population size.  Neither study examined the causes of changes in bat population sizes, however, he said.

Going forward, Frank said his research will focus on learning how big brown bats are able to resist the disease.