skip to main content
Return to Fordham University
You are at:Home»Colleges and Schools»Fordham College at Lincoln Center»A Mathematical Legacy

It had been several years since Peter M. Curran, Ph.D., FCRH ’47, had been to Duane Library.

The professor emeritus of mathematics, now assisted by a cane, seemed pleasantly surprised that he didn’t have to climb stairs to access the building, a long-gone grand staircase having been removed during a renovation.

Curran was on campus on Jan. 21 to hear one of his former protégés, Frank Connolly, Ph.D., FCRH ’61, deliver a lecture to members of the Fordham community. Connolly, in turn, had been invited back to campus by one of his protégés, David Swinarski, Ph.D., assistant professor of mathematics.

Connolly was waiting for Curran in Tognino Hall.

“No, it hasn’t; has it been that long?” said Connolly. 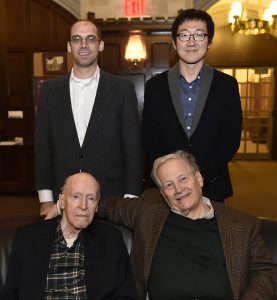 Last year, the Council on Undergraduate Research, an organization that supports high-quality undergraduate student-faculty collaborative research, recognized Connolly’s contribution as a mentor by presenting him with the first-ever Goldwater Scholars Faculty Mentor Award.

Connolly, who is now a professor emeritus at Notre Dame, said that much of what he brought to his teaching career he learned at Fordham. He dedicated the lecture to his own Fordham mentors: Curran, Charles Lewis, S.J., and Frank Crippen, Ph.D.

“I think that the spirit of these men was transmitted to me,” said Connolly. “I mentored more than was typical [among faculty]at Notre Dame and I think what drove me to do so was a memory of what I had as an undergraduate here.”

It wasn’t always like that at Fordham. Curran remembered a math department greatly reduced by faculty called to fight in World War II. His own experience was interrupted as well. He spent a year and a half studying before going into the army. After the war, he returned to complete his degree “in a very accelerated way.”

Once he’d earned a doctorate at Columbia University, Curran came back to his alma mater as a professor in a newly invigorated department.

Connolly recalled the sixties as the department’s golden decade. He said that was due in large part to the commitment of his mentors to go above and beyond their daily duties. Curran credited Father Lewis, who was then chair of the department.
“He was a wild man,” said Curran. “He determined that we would have tremendous curriculum for math majors. It was very difficult, but quite a few Ph.D.s came out of that program.”

The two alumni laughed about the master’s level curriculum being thrown at unsuspecting undergrads. Connolly recalled a course on complex analysis using a text by a Finnish mathematician, Lars Ahlfors. This prompted a smirk from Curran.

“I spoke to Ahlfors once and told him that we used that book for undergrads and he said ‘Really?’ I told him I had to make it hard,” said Curran.

“I didn’t know that this was beyond me, so I just worked very, very hard,” said Connolly, who later incorporated the teaching technique of “taking a young person who doesn’t know that it’s super hard.”

“They just think that’s the way the world is structured. You just have to be very genial and quite demanding,” he said.

Connolly recalled that he was part of a group of five students that the mathematics faculty took under its wing. Also part of the group, he said, were Vincent O’Neil, Theodore O’Neill, Richard Shannon, and James McCaffery.

“We started seminars for them and used graduate level books, he said.

Connolly placed the difficult coursework he received from the professors in context.

“This was a progression of an American Catholic subculture, which had a lot of disadvantages in the early part of the 20th century,” he said. “It was the generosity of people like Peter, Frank Crippen, Father Lewis, and people like them who had not had very many advantages in their own undergraduate experiences, that made things possible for my generation.”