A Fordham physics professor has collaborated with researchers at The Polytechnic Institute of New York University and City University of New York to detect the smallest known aqueous-borne virus through new nanotechnology. 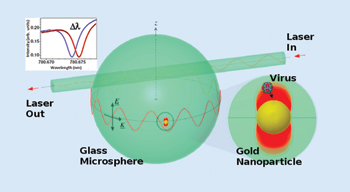 Stephen Holler, Ph.D., and the researchers’ “plasmonic hybrid whispering gallery mode sensor” consists of a microscopic glass bead no wider than the thickness of a human hair (approximately 100 microns in diameter). The bead has a single gold nanoscopic antenna affixed to its equator that, with the aid of light forces, draws a single virus particle to a nanoplasmonic “hot spot.” Using a wavelength tunable laser source, the team then interprets a signal obtained from the shifts in colors of light (i.e. resonances) that circumnavigate the glass bead, to detect and measure the size of the attracted particle—in this instance an RNA virus whose molecular weight is below that of all known viruses.

Such direct object detection of a single bio-nano-particle of this size had previously been unattainable, said Holler.

This record-setting achievement was published in the July 30 issue of Applied Physics Letters, and subsequently highlighted by the American Institute of Physics.

Holler said the new discovery has numerous useful applications for identifying and studying biological particles, but more importantly for real-time medical diagnostics.“Medical diagnostic technology may soon be capable of rapidly detecting the presence of a single virion in blood or saliva—including common viruses such as influenza, HIV, Hepatitis and West Nile,” he said. “We envision doctors performing these tests in the office and getting results in minutes, not days. Early detection means immediate treatment, which can save lives.

“In addition, this sensor platform can serve as a sensitive device for monitoring for the presence of other biological and non-biological targets for medical (e.g., bacterial infection) and security applications (e.g., detection of biological or chemical warfare agents, explosives, and radiological/nuclear contamination).”