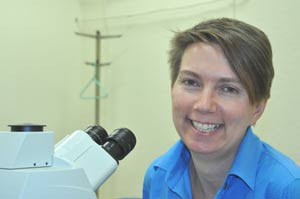 New research from a Fordham University cell biologist suggests that a diet rich in anti-oxidants and begun at a young age can significantly reduce age-related blindness.

Silvia C. Finnemann, Ph.D., associate professor in the Department of Biological Sciences, conducted the three-plus-year study by comparing the vision of three groups of mice fed differing diets: One group received a diet rich in freeze-dried grapes, a fruit very high in anti-oxidants. Another group received a diet rich in lutein, an anti-oxidant derived naturally from marigolds. The third group, the control group, received a normal diet.

All of the mice used were from the same genetic strain, said Finnemann—one prone to developing retinal damage in old age in much the same way as human beings do.

Those mice fed a grape-rich diet, however, did dramatically well: retinal function decreased by only 16 percent.

“We’re not suggesting that you need to eat grapes like crazy, but that a life of having a healthy diet of natural anti-oxidants makes a difference to changes in the human eye,” said Finnemann.

Finnemann’s study also showed that, in order to be effective, eating anti-oxidant-rich foods should begin before the onset of advanced age, preferably in youth or young adulthood.

Mice who were not fed a grape and lutein-rich diet until they were the equivalent of a human age of 60 showed little or no improved retinal function, she said.

According to statistics, Age-Related Macular Degeneration (AMD) is the leading cause of blindness or partial blindness in the elderly, affecting about 25 percent of the population over 70 years of age in the United States. Finnemann said she hopes her study will lead to the development of new ways to prevent AMD, especially among the bourgeoning elderly population of baby boomers.

Finnemann was assisted in her research by Chia-Chia Yu, M.S., and Ying Dun, Ph.D., both from her laboratory at Fordham University and Emeline Nandrot, Ph.D., a biologist from the Paris-based Institut de la Vision. Funding was provided by the National Eye Institute of the National Institutes of Health and The California Table Grape Commission.

Results of the study were published in December 2011 in Free Radical Biology &amp; Medicine.