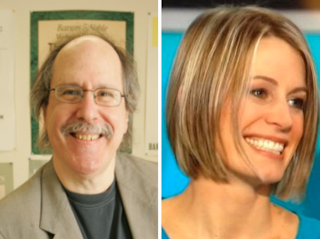 Paul Levinson and Christiana Peppard
* This post was updated on Oct. 11. See updates at the asterisks.

Fordham professors speak at several conferences throughout the year, and sometimes they’re high up on the pop culture scale.

Last May, for instance, Thomas Beaudoin, Ph.D., associate professor of theology at Fordham’s Graduate School of Religion and Religious Education, gave a presentation on “Secular Music as a Quest for More” as part of a panel at the very buzzworthy South By Southwest (SXSW) tech and music conference in Austin, Texas.

Hosted by Academy Award-nominated actor, James Woods, the panel will focus on “Tech Toys from the Future.” It is presented by Futurescape, a six-part series on the Science Channel.

According to show organizers, this “tech road show from the future” will feature notable “‘rock stars of the gadget world’ as they unveil the ‘latest and greatest’ in the world of technology.”

Attendees will also see exclusive footage from the upcoming season of Futurescape with commentary from the producers.

“Each episode of Futurescape will look at one idea or discovery that will critically alter life as we know it: Synthetic Biology, Predictive Analytics, Habitable Planets, Nano Technology.

“Woods will ask the big questions, ignite debate and reveal a stunning image of the future.”

That’s where Peppard will come in, as she’ll discuss some future aspects of synthetic biology. *Paul Levinson will discuss the civil rights of robots. (Yes, you read that right.) Here’s how describes it:

“We invent robots to be our servants — to do dangerous or tedious jobs that we would rather not do,” Levinson says. “We try to make them more and more intelligent, so they do their jobs better. What happens when we make our robots so intelligent that they are sentient beings? Are we morally entitled to continue treating them as slaves? Or will our future robots be entitled to civil rights?”

Two Fordham professors and an Academy Award-nominated actor discussing the future? Sounds good to us!