skip to main content
Return to Fordham University
You are at:Home»Faculty Profiles»Tracking the Migration of a Cancer Cell 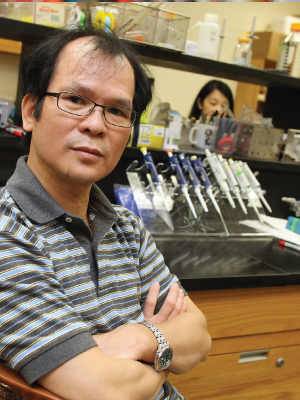 Qize Wei’s calling came early in his childhood, although he didn’t quite know it at the time. Liver cancer was common in his native Guangxi Province, China, and when it struck two members of his extended family as well as one of his classmates, he wanted to know why.

He pursued science in school and became a doctor, but only practiced for about a year before going back to school again, driven by an urge to look deeper into the root causes of disease.

“At the end of the day, I really just want to understand how the disease [was]able to get to this point, why some people got it, some people didn’t get it,” said Wei, Ph.D., an associate professor in the Department of Biological Sciences.

Today he’s studying breast cancer—in particular, the way that it spreads, or metastasizes, to other parts of the body via the bloodstream. It’s a complex process, with many stages, and Wei is focusing on its very beginning, when one of a tumor’s cells breaks loose so it can start migrating.

“When they go in the blood, they can go anywhere,” causing the secondary tumors that make the cancer much more difficult to treat, Wei said.
Much remains unknown about these unusually rugged cells and how they’re able to “colonize” other parts of the body, making a journey that normal cells would never be able to survive, he said.

“They’re a different animal. They’re very tough,” he said, noting that some researchers have posited that only cancer stem cells are able to complete the trip and seed a tumor elsewhere in the body.

Whether they complete the trip or not, tumor cells are prone to migrating, Wei said, noting their out-of-control proliferation and their loose attachment to each other.

This migration can start in two ways, Wei said. First, the cell can “digest” its way through the matrix of collagen fibers surrounding the tumor and enter one of the blood vessels that feed it. Treatments that focused on this process proved ineffective in the 2000s, however, leading researchers to pay more attention to the cells’ second means of escape: changing shape so they can squeeze their way through the matrix.

This shape-shifting is governed by proteins that, Wei believes, are activated by another protein called myosin-interacting guanine exchange factor, or MyoGEF. A few of his experiments appear to confirm the relationship between these proteins; in one, he found that abating MyoGEF in cultured breast cancer cells prevents them from invading the surrounding tissue.

The next step is to see if metastasis is lessened in mice that have breast cancer but not MyoGEF. If so, the step after that would be to develop a treatment that somehow inhibits this protein.

In other research, he’s conducting experiments to better understand the role that MyoGEF plays in cell division.

Wei is broadly interested in the actomyosin cytoskeleton, a part of the cell that is crucial not only to the cell’s replication, but also to the changes in the shape of the cell that enable it to slip through the collagen matrix. He first became interested in this area of research while serving as a research associate at the National Heart, Lung, and Blood Institute, part of the National Institutes of Health, from 1997 to 2004.

Wei feels good to be drilling down into a complex disease and searching for the basic mechanisms that drive it, no matter how long the process may be.

“It’s something that keeps you going,” he said. “You work in the lab every day, and the experiment could fail again and again. And you need to have this kind of motivation, like, ‘I really want to understand this, now matter how hard it is.’ You have to try it again and again and believe that you are able to understand the process.”