If you want to know what kind of pollen is drifting around outside, it’s not that hard to fashion a collection device out of a Frisbee, a jar, and some glycerol.

Above, Guy Robinson stands underneath two monitors on West 41st Street in Manhattan.
Below, one of Robinson’s pollen traps, ready to be mounted to a pole.
Photos by Patrick Verel

But to help Kate Weinberger track the pollen levels of 45 locations around New York City, Guy Robinson, Ph.D., needed to come up with something more adaptable.

Robinson, a lecturer of biology at Fordham College at Lincoln Center, has monitored pollen levels at the Lincoln Center campus since 2009, when Fordham’s pollen monitoring was expanded from a single station at the Louis Calder Biological Field Station. (You can follow his weekly counts on Twitter @FordhamPollen.)

Weinberger, a doctoral candidate at Columbia University’s Mailman School School of Public Health, sought out Robinson to help her develop a project to systematically measure how pollen is dispersed around the five boroughs.

Unlike the monitors that Robinson deploys on the roof of Fordham Law School and at the Calder Center in Armonk, N.Y., these had to be compact enough to piggyback on the 150 light poles where the city’s health department maintains air pollution monitoring equipment. The design mimics the way that pollen gets trapped in lake floors and bogs.

“We needed a design that’s not nearly so bulky. It had to be compact and be able to be strapped to a pole. So we just took a screw end cap and a slip cap for schedule 40 PVC piping, which you can get at a hardware store and which is quite thick and sturdy,” Robinson said.

His final version looks a little bit like a squat cocktail shaker with a hat. The screw that attaches the bottom to the carrier also connects to a mounting brace, allowing for easy removal. Weinberger installed the first ones in late February and early March; they will be taken down for analysis in December. 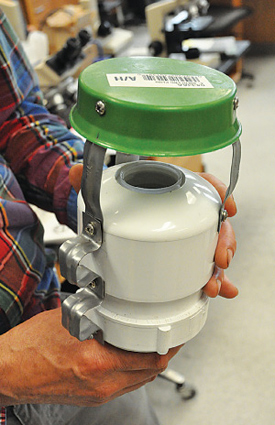 The installation followed a successful pilot project that Weinberger ran from August through December 2012 at 10 locations. What made the pilot project intriguing for Robinson was the fact that at some locations, even when ragweed was observed nearby, very little of the plants’ pollen accumulated in the trap. Robinson attributed this to the vagaries of air currents, which are influenced by structures big and small.

“It’s not always as easy to predict, but the detectors can pick up what people are actually exposed to,” he said.