The students were selected from more than 350 applicants to join the first cohort of Project TRUE (Teens Researching Urban Ecology), a collaboration between Fordham and the Wildlife Conservation Society (WCS). The project aims to grow interest in Science, Technology, Engineering, and Mathematics (STEM) careers among historically underrepresented populations.

The program is part of a five-year study led by Fordham and WCS to test the effectiveness of tiered mentoring in helping students get accepted into college and find careers in STEM fields. The study, which is funded by a $2.6 million National Science Foundation grant, connects New York City high school students with Fordham biologists, graduate and undergraduate students, and WCS educators. 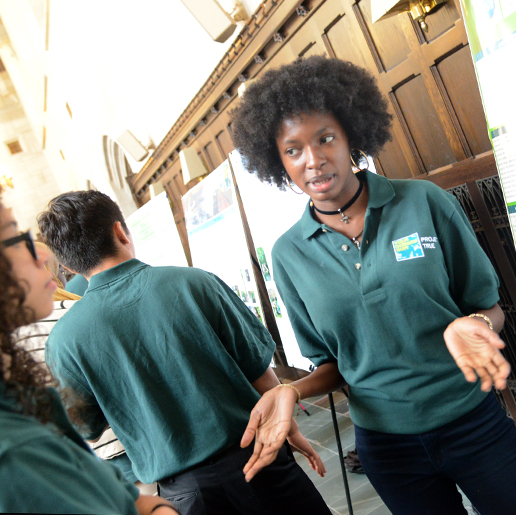 Ada Marshall, a junior at Uncommon Charter High School, presents her research on herbivories and pollinators. “There’s always a question to answer,” Marshall said about why she is drawn to science. “Even if I don’t find that answer, I still feel satisfied that I tried, that I put effort into it.”
Photo by Tom Stoelker

If successful, the program could ultimately be scaled up and implemented nationwide, said Amy Tuininga, PhD, Fordham’s principal investigator for Project TRUE.

“Mentoring gives you the power to offer real research experience to a greater number of students,” said Tuininga, an associate professor of biology. “I couldn’t mentor all of these students in my lab, but I could mentor one or two graduate students, who then go on to mentor more students.”

One of the more striking outcomes of having a tiered mentorship structure, said WCS instructor Lily Mleczko, was how effectively the students communicated with one another, despite differences in age and education.

“I graduated from high school 13 years ago, so I’m a lot farther removed from that experience than the undergraduates. They were an essential step to simplifying and explaining scientific concepts and research methods to the high school students,” Mleczko said.

“And it didn’t stop at the science—the undergraduates would talk to them about what it’s like to be in college and about different resources at Fordham, like the CSTEP program.”

That mentoring relationship is, in fact, at the crux of Project TRUE, said Karen Tingley, director of Zoo and Aquarium Programs and Business Development for the WCS Education Department.

“The undergraduate students are an important part of the equation. Rather than having someone at the ripe old age of 30 mentoring the high school students, they have the undergrads to look at and think, ‘This person is 19 years old and is doing all of this. I can do this too,’” Tingley said. 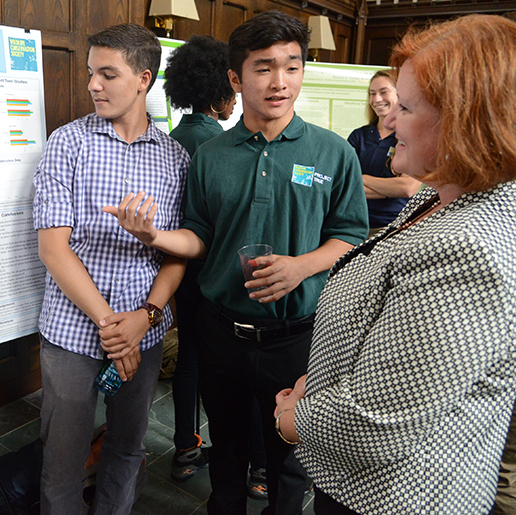 The mentorship doesn’t stop after the research ends, however. The students will reconvene in the fall for a two-day college boot camp that offers instruction and guidance on the college application process. Over the next four years, the team will maintain contact with the students, both to inform them of internships and research opportunities and to measure their progress in college.

If successful, Project TRUE will have helped 200 New York City high school students gain entrance to the STEM fields by the end of the five-year study.

“The goal is for them to see that there’s a world of career opportunities out there and that these opportunities are for them, too—not just others,” Tingley said. “That’s why we wanted to have the program happen in this space—at Fordham—so that they can see that they, too, belong here in college.

“It’s a matter of showing them that there are opportunities out there for them, and their opinions and their voices matter.”