skip to main content
Return to Fordham University
You are at:Home»Colleges and Schools»Graduate School of Arts and Sciences»Tapping the Fruit Fly to Cure Prostate Cancer
In his Rose Hill laboratory, Edward Dubrovsky, above, is studying how prostate cancer develops.
Molecular biologist Edward Dubrovsky would be the first to testify to the genetic brilliance of Drosophila melanogaster, the simple fruit fly. Its classic genetic model is a biological favorite because it offers a plethora of research tools and, frequently, its gene sequencing and activity mimics that found in many other animals—including humans.

A recent report connecting the human ELAC2 gene to the occurrence of prostate cancer in men piqued Dubrovsky’s curiosity. In his Rose Hill lab, he and his students had cloned a Drosophila RNase Z gene, and done lengthy studies on its protein activity. They established that both the human ELAC2 gene and the Drosophila RNase Z gene shared certain structures and enzyme activities that classified them as “homolog” genes (one similar in structure and evolutionary origin to a gene in another species).

Now that it appeared the fruit fly’s RNase Z gene mirrored the activity of the human prostate cancer (PCA) susceptibility gene ELAC2, Dubrovsky saw a chance to study the human disease through the tiny winged insect.

This year his lab has received a grant from the Department of Health for New York State to undertake research to help influence and improve early diagnosis of the disease—PCA is the second-leading cause of cancer death in men in the United States. 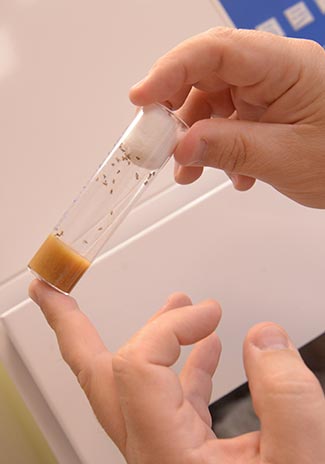 “I’m not a doctor, I don’t meet patients. But I still believe that we can help improve [the disease’s] diagnostic. We are working toward further knowledge of the mechanisms underlying the initiation of PCA. Using a fly model, we can find mechanisms regulating prostate growth and development of PCA,” said Dubrovsky, professor of biology.

In his Rose Hill campus lab, where he houses hundreds of vials of fruit flies, Dubrovsky and graduate students are creating flies that have the same genetic mutation found in humans predisposed to the disease.  Dubrovsky says they do not yet know “how certain mutations can result in increased risk of PCA,” but his study offers two hypotheses: one involves an alteration of RNase Z enzymatic function that creates cancer cell growth; and another that looks at whether RNase Z could have  a completely different function unrelated to enzymatic activity, but that, when damaged, may lead to transformation of prostatic cells.

He hopes that studying the mutant flies will shed some light on the mystery of how the disease develops.

Although he says there are “other models closer to humans to study,” Dubrovsky sees an advantage with the fruit fly because of its short life cycle: the fruit flies undergo an approximate 10-day metamorphosis from egg to larva to pupa to flying insect, and then live for approximately another 2 months under optimal conditions.

“Because of the fly is so quick to live and die, we can create genetic lines that carry any desired mutation within short period of time” he said.

Dubrovsky began studying the fruit fly’s hormonal and genetic characteristics as a student in his home country of Russia. From there, he moved to France to continue his schooling and research, and eventually came to the United States, where he was a member of the faculty of Dartmouth College for 11 years.

In 2006, he came to Fordham, where his research into the genetic and hormonal activities of Drosophila continues.

“They still fascinate me,” he said.