skip to main content
Return to Fordham University
You are at:Home»Science»Students Welcomed to the Body of Scientists 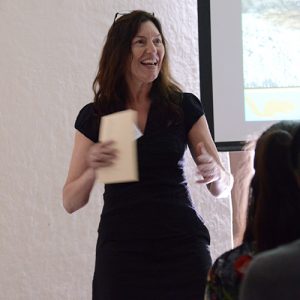 Evon Hekkala was one of many Fordham faculty mentors for the program.

Welcoming student researchers into the “body of scientists,” Mark Siddall, PhD, curator in the Division of Invertebrate Zoology at the American Museum of Natural History, said that their initial step was simple.

“All it takes is a declarative sentence: I am a scientist,” he said.

Siddall spoke on Aug. 7 at the Calder Summer Undergraduate Research (CSUR) program’s annual symposium at Fordham’s Louis Calder Center in Armonk, New York. He told the students that their research was valued by the scientific community and would give them an edge when applying to graduate programs.

In what amounted to a commencement address for the newly minted researchers, Siddall dispensed sound advice for becoming a scientist, though he later said that the advice could be given to any passionate student thinking about grad school.

He told them to “remember where you come from” and to be prepared to “succeed by accident.” He also repeated the adage, “If you’re the smartest person in the room, you’re in the wrong room.”

He also told the students “scientific growth doesn’t come from solving problems, but from creating them for yourself.”

With each piece of dispensed advice, Siddall shored up his suggestions with a personal anecdote. He noted that he succeeded by accident when he ended up studying invertebrates because he was trying to avoid taking a required genetics course.

But Siddal added that his segue from the required coursework led him toward his life’s passion: leeches. He figured out that he could take a course in parasitology, the study of parasites and their hosts, in place of the genetics requirement.

He then began to study a parasite feeding on a particular frog and proved that the parasite was a leech. That finding was published while he was still an undergrad in 1988, which, he said, underscores his belief in the importance of undergraduate research.

Siddall is now the president of the American Society of Parasitologists.

Eleven students presented their research, which was done over the summer with their faculty mentors. St. Francis College’s Rachelle Carino discussed how catnip oil, usually found to excite cats, might also be used as a repellent for ticks.

Florida State University’s Giselle Herrera worked with the Gotham Coyote Project in one of the more thankless jobs. Using a “scat dog” trained to sniff out coyotes, Herrera and other Calder lab researchers collected 868 fecal samples from Westchester, the Bronx, Manhattan, Queens, and Brooklyn.

Genetic coding showed that, of the 63 samples from males and 14 from females, there were 55 unique individuals in the sampling. This led Herrera to speculate that the territorial males roamed more, while females tended to stay home tending to their pups. 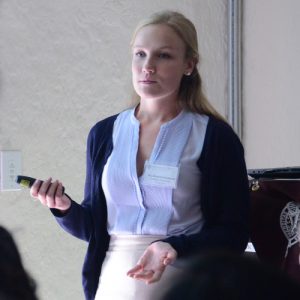 Fordham student Elizabeth Eisenhardt tested some prior research done at the CSUR program two years ago. She evaluated whether there was a species distinction between two subspecies of Eastern chipmunks. Even though earlier research found a small difference that may indicate a distinct species, Eisenhardt’s research of the genomes did not find the differences.

“But this is just beginning, if it turns out to be speciation then this would be an awesome paper,” she said later. “In science you can’t always expect something like that. You’re an investigator and you have to report what you find.”

This was the 18th CSUR symposium at Fordham. The summer program is funded by the National Science Foundation through its Research Experience for Undergraduates program. CSUR also received support from the Wildlife Conservation Society.