skip to main content
Return to Fordham University
You are at:Home»Science»Student Research on Birds Leads to Unexpected Leadership Role 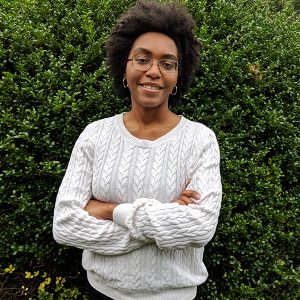 The more crowded the neighborhood, the more social the bird. Such are the findings of an interspecies study by Fordham College at Rose Hill junior Lindsay Thomas.

Thomas, who is majoring in biology and minoring in sociology, unveiled her research at the Sixth Annual Bronx Science Consortium Poster Symposium on Wed., Oct. 3. Her work focused on observing birds, and how humans interact with them, in New York City parks. She hypothesized that birds live in different “avian communities” across the city, and, just like their human counterparts, their behavior often reflects the environment of their neighborhood.

In crowded parks, like Central Park, Thomas found that birds and humans interacted closely. People could get close to birds before the birds would take off and seek refuge in nearby woods—and not even that far into the woods. In less crowded parks, like Pelham Bay Park in the Bronx, birds flew away much sooner when people approached them, and they fled much deeper into the wooded areas. 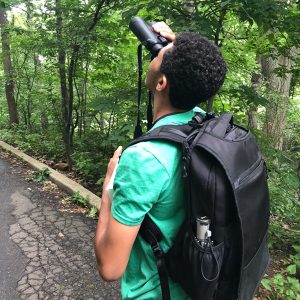 “In Central Park the birds are competing for the same areas of the park as humans so they tend to hang out in areas such as footpaths and fountains,” said Thomas. “Unfortunately, birds also tend to use humans as easy food sources due to frequent hand feeding.”

Thomas wasn’t alone in tracking bird-human observations; she was supported by New York City high school students recruited for the study through Project TRUE (Teens Researching Urban Ecology), a program funded by the National Science Foundation that pairs teens with educators from the Wildlife Conservation Society and Fordham researchers.

One of the students, Angel Torres, riffed on Thomas’ work. Out in the field he noticed that birds were more vocal in crowded parks where they were competing with humans and city noise; they were less vocal in quieter parks. However, regardless of the park, when the same species of bird was observed in close proximity to others of the same species, vocalization rates increased. 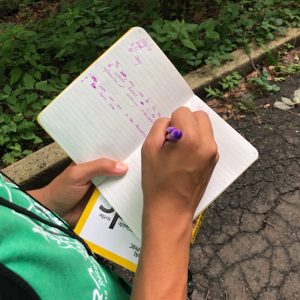 Teen takes note of his observations.

Thomas’ groundwork for the research began after Tiffany House, her counselor from CSTEP (Fordham’s Collegiate Science, Engineering, and Technology Program), encouraged her to apply for a summer research internship with Project TRUE. As Thomas lives in Rockland County, CSTEP funded her housing for the internship.

Through the Wildlife Conservation Society, she was matched with Jocelyn Harrison, a conservation educator from Central Park who helped her iron out research methods and questions. She was also mentored by Fordham graduate student Emily Casper. By July, she was explaining research methods to three teens and working in the field gathering data with them.

Observing her own mentors opened up new possibilities for Thomas.

“It was great seeing people who were more along in their careers, like Jocelyn. I didn’t know that her job even existed,” she said of the conservation educator. “And I didn’t know we had such a diverse graduate program in biology until I met Emily. Her research is in marine biology! I thought you had to go somewhere else to study that.”

After college, Thomas hopes to pursue fellowship opportunities. Her interests lie at the intersection of policy, public health, and the sciences.

“One of the major takeaways,” she said, “was just working with the high school students and seeing how smart and driven they were.”

Thomas said she went to a low-income high school where budget cuts led to reduction of advanced placement classes.

“When I started this program, my main goal was to provide the students with guidance that I didn’t have at their age,” she said. “If I heard they were interested in college, I would be really on to it and encourage them.” Last month one of the students sent her a college essay to read.

“I tried to offer support beyond the program, support that I didn’t get,” she said.