skip to main content
Return to Fordham University
You are at:Home»Science»Student Highlights Unseen Vibrant World in New York-Area Ponds
Michael Kausch sampling water from the Central Park Lake.
Contributed photos
Michael Kausch has a very mixed relationship with some of the smallest living things on earth.

On the one hand, Kausch, a Ph.D. student based at Fordham’s Louis Calder Center biological field station, is studying the causes and consequences of harmful algal blooms (HABs) in New York metropolitan area lakes.

For the last six years, that has involved traveling to about 20 lakes in and around New York City and collecting water samples to determine concentrations of dissolved nutrients, chlorophyll, and phytoplankton species composition. Algal blooms are a big concern now, and in fact, the State of New York has dedicated $82 million to combat them in places such as Lake Carmel in Putnam County, one of Kausch’s sites. In addition to appearing as foam or scum on the surface of the water, the blooms can produce toxins that make people and animals sick. Preventing explosive growth of these microscopic organisms is so key to his work, that the tentative title of his dissertation is “Causes and consequences of cyanobacteria harmful algal blooms in New York metropolitan area lakes.”

On the other hand, despite trying to prevent the blooms, he happens to be fascinated by them. 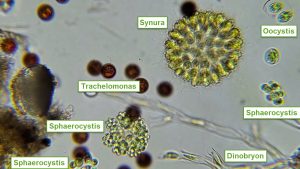 “I’ve always been interested in the smallest life forms. I certainly think they’re the most interesting life forms, and many times, the most important ones,” said Kausch, a native of Queens who earned a master’s degree in applied environmental geosciences at Queens College.

“They can also cause some substantial problems for humans. Climate change and nutrient loading, which is when human activity triggers the release of nitrogen and phosphorus, are happening pretty much all over the world, so in the last few decades it seems like there’s been an explosion in the occurrence and the intensity of harmful algal blooms.”

Last month, Kausch, who goes by the Twitter handle @NYCMicrobes, tweeted out the view he’s had in the lab with the wider world. With the aid of an Em1 portable microscope and an iPhone, he created videos of several algae, including synura, oocystis, and his favorite, euglena, flitting and bouncing around in their aquatic world. The videos, which he set to music that he’s recorded with friends, are a side project, but have attracted some attention; the Quebec City newspaper Le Soleil included them in an article published in their science section in July.

“I think these could be good for teaching because I feel like people might be amused by the music, and then also seeing the cool algae moving around,” Kausch said. 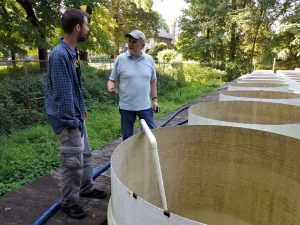 Kausch has been working under the supervision of John Wehr, who mentors projects in the University’s Experimental Lakes Facility (ELF) tanks, a collection of two dozen 1,200-gallon tanks that can hold entire lake communities for research purposes.

When it comes to the research, which Kausch has conducted under the supervision of John Wehr, Ph.D., the most intriguing finding is that in the lakes with the highest concentrations of chlorophyll, the concentrations of nitrogen greatly affect the growth of algae. This is important because up until recently, the focus has been on the ways phosphorus can spur growth, rather than nitrogen.

“Historically, efforts to control HABs have focused on reducing phosphorus loads, but in the past decade or so, the literature has increasingly highlighted the importance of dual-nutrient management strategies targeting both nitrogen and phosphorus loading to control HABs,” Wehr said. Both come from waste created by humans.

“Sometimes it’s the nitrogen and phosphorus together, but the point is we as humans create waste in all sorts of ways, and that waste finds its way into water bodies,” he said.

He said one need not go further than Central Park to see how harmful algal blooms can be. Visit the boat rental area, and he noted that you’ll see signs warning against letting dogs swim there because some of the algae produce toxins. Excess use of fertilizer is one culprit; human waste can be another.

“Our use of the environment leads to these hyper-eutrophic, or sometimes hyper-productive situations, which people find aesthetically unpleasing, but in some cases, it’s also biologically undesirable,” he said.

“It changes the structure of the community, biodiversity goes down, we see unpleasant tastes and smells in water bodies, and then occasionally it produces toxins.” 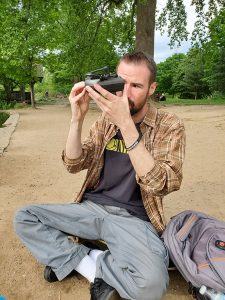 Like Kausch, Wehr said he finds cyanobacteria to be fascinating—one of the remarkable features of some of them is their ability to draw nitrogen from the atmosphere when levels of it in the water start to dip.

“When there isn’t enough nitrogen in the system to keep supporting these blooms, certain species come to the fore and pull nitrogen from the atmosphere, convert it into usable forms, and keep on ticking. It’s quite a remarkable and amazing group of organisms with their adaptations,” he said.

Kausch’s enthusiasm translates into the lab, Wehr said, making him a natural to inspire and mentor undergraduate students. Like most researchers in the lab, he tends also to get more excited by algae-covered bodies of water than the average person would.

“I think his motivation to share some of what he’s been learning with videos and pictures is a good example of how he wants to share what he’s learning, and the excitement of discovery.”