skip to main content
Return to Fordham University
You are at:Home»Colleges and Schools»Fordham College at Rose Hill»Sharing Knowledge at Fordham’s 2017 Undergraduate Research Symposium
Photos by Dana Maxson
How close can you get to a squirrel before it decides to flee?

Psychology student Laura Frank, and biology students Olivia Giannakopoulos and Ian Villagran wanted to know. They took the question a step further by examining how a drey presence, or a squirrel’s nest, can impact how close Eastern Gray squirrels at New York’s Central Park and the Rose Hill campus will allow humans to get to them.

“This fleeing behavior has been studied in many animals, and it depends on a multitude of factors, such as the speed of the prey, where [the squirrel’s]positioned in relation to its refuge, and the environment around it,” said Frank.

The trio was among 327 undergraduates at Fordham College at Rose Hill (FCRH) who presented research at the college’s 10th Annual Fordham Undergraduate Research Symposium. Held on April 26 at the McGinley Center, the event featured projects from students and their faculty mentors in a variety of disciplines, including classics, history, engineering physics, biology, music, computer science, urban studies, and integrative neuroscience.

“It’s a great example of faculty and students collaborating, innovating, and bringing new knowledge to the world,” said Maura Mast, Ph.D., dean of the college.

In his congratulatory remarks to the undergraduates, Joseph M. McShane, S.J., president of Fordham, said he hoped that the symposium would create a “chain reaction” and spark “wonder and curiosity” throughout the students’ academic and professional lives.

Undergraduate research supporter Dennis J. Drasco, Esq., FCRH ’70, a leading trial lawyer and member of the House of Delegates, spoke about how his Fordham education taught him to value knowledge and use it to help others.

“Now that I’ve had the opportunity to meet the next generation of brilliant, eager, optimistic young scholars and leaders, I ask you to please follow in that tradition,” he said.

Drasco’s message of helping others through applied knowledge could be seen in many of the students’ research projects, including engineering physics student Marissa Vaccarelli’s project, “Improving Current Models of Prosthetic Hands Using Three Dimensional Printing.”

Vaccarelli constructed prosthetic hands using the 3-D software tool SolidWorks and 3-D printing techniques to create a more flexible prosthetic hand for amputees or people who were born without limbs. She was able to create movement using a microcontroller board called Arduino Micro, she said.

“For me, this project is tangible because not everyone is lucky enough to have limbs, so 3-D printing is a really great alternative for limbs that are lightweight and durable as well,” said the Clare Boothe Luce scholarship recipient.

“We’re using science and technology to really bring a change in the world, which is inspiring.”

A few rows down, biology students Olivia Ballone, Michael Liberto, Eric Ohlendorf, Ryan Mason, and Hyun Jeong were presenting their research on rapidly mutating diseases. The group said they hoped their project would provide a deeper understanding of the evolution of influenza so that vaccination and other drugs are more effective in combating the virus— especially in the event of a pandemic.

“The reason we chose influenza was because we have an outbreak of it every year,” said Ballone. “It rapidly mutates each year [so]we can’t use the vaccination from last season’s outbreak. We have to keep establishing new prevention methods and understanding how it mutated to stop every single outbreak.” 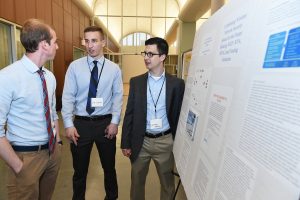 Another group of students, computer and information sciences majors Luke Johnston and Chris Mallozzi, were concerned with data integrity and wireless network security issues in age of connectivity and hacking. In their research, they exposed security vulnerabilities in WEP, WPA, WPA2-PSK, and WPA2-AES algorithms on routers, they said.

“If we’re looking to help children who have emotional dysregulation, temper outbursts [or]emotions that are not considered typical, we need to understand what is typical development,” said James.

Shahin said the symposium challenges student researchers like her to not only explore the world, but also take abstract concepts and make them comprehensible to the average audience.

“Just watching the other presenters on my panel made me think about subjects that I think I know about in a different way,” said Shahin, who gave an oral presentation at the start of the symposium. “It exposed me to different ideas and new ways of thinking.”