skip to main content
Return to Fordham University
You are at:Home»Science»Road to Medicine Leads Through Urban Ecology
Elle Barnes, Erin Carter and Dan Khienenson search for red-backed salamanders on the grounds of the Calder Center
Erin Carter has plans to become a doctor someday to save lives. But before she treats the human body, Carter, a senior at Fordham College at Rose Hill, is working to save salamanders.

It’s not as big a leap as one might think.

“The amphibian population is very unique, in that they have a very intimate relationship with their environment. They breathe through their skin and get their nutrients through their skin,” said Carter, who is working toward a five-year master’s degree in molecular biology.

“We also have millions of bacteria that live in our skin and our body, so studying the way certain species of bacteria work together to protect against foreign invaders is more applicable to humans than you might imagine.” 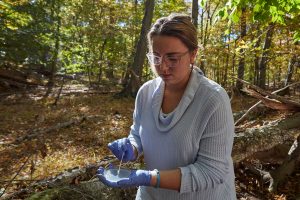 Carter collects a sample of a swab taken from the skin of a salamander.

Carter has been assisting Elle Barnes, a doctoral candidate at the Louis Calder Center, research red-backed salamanders. Batrachochytrium dendrobatidis, also known as the Chytrid fungus, is ravaging frog and salamander populations around the world, In some cases, it is threatening entire populations with extinction. The red-backed salamander, which is found on the grounds of the Calder Center, is not affected, however, and scientists want to know why.

At the center, Carter helped corral the salamanders, swabbed their skin, and extracted DNA from bacterial colonies that were bred from the swabs. The idea is to get a better sense of the salamanders’ microbiome.

She admits she was a little skeptical when Barnes pitched her on the idea.

“Elle sent me paper that sparked her interest in this story, and she said to me, ‘In every place where you see the word salamander, you can replace it with the word human,’” she said.

“I went through it, and it sounded like something I want to be a part of. I said ‘sign me up.’” 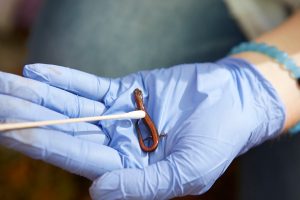 A red-backed salamander gets swabbed with a q-tip as part of an effort to map out its microbiome.

A rare three-time recipient of Fordham’s undergraduate research grant, Carter has interned with a cardiologist and shadowed an attending physician on hospital rounds. She’s especially interested in oncology because of advances that have been made in molecular science.

“This research has opened doors to meeting new people who have such different views on how biology works.  In premed, you can fall into a one-track mind: Do all the prerequisites; go to medical school; and do all the résumé-building [to]make yourself robust as a candidate,” she said.

“The most rewarding part of this project has been appreciating biology as a science and appreciating the work that these researchers are doing.”

“It’s given me a deeper understanding for what ecologists do and research biologists do.”

For more on Barnes’ research on red-backed salamanders, click below: