Young children will naturally include laughter and fun in the learning of a new physical skill, but could their humorous engagement with the task actually help them to master it?

The answer is yes, according to a study by David Glenwick, PhD, professor of psychology. 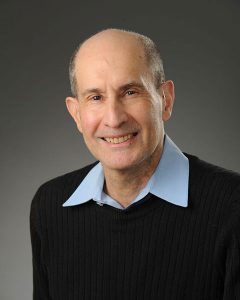 In collaboration with Cassie Fichter, a senior at Fordham College at Lincoln Center, Glenwick studied two groups of 4-to-5-year-olds at the Bloomingdale Head Start Program in Manhattan, comparing their accuracy and persistence in throwing a ball into a basket. Each group consisted of 26 students.

They found that when humor was incorporated into the task, the children performed better.

One group of children in the study performed the task with a typical basketball set-up, which researchers deemed a “neutral condition.” The other group performed the same task, except with a cut-out of a clown behind the basket. Researchers labeled this a “humor condition” and asked the group to help the clown make a “silly cake” with ingredients—an umbrella, an elephant, and a duck, which were pictured on the balls.

Glenwick and Fichter found that for the first five shots, the groups did not differ in their success rate—probably because the activity was new and the interest was strong in both groups. However, with greater repetition came more disparity. After many shots, the children participating in the humor conditions showed a 72 percent success rate, while the success rate of the neutral conditions group was at 53 percent.

Drawing upon previous research on humor, Glenwick proposes that there are several possible reasons why the kids in the humor group performed better. One reason could be that the humor helped the children focus their attention and maintain their interest and motivation. Additionally, he said, humor may have helped to reduce their anxiety in the test situation.

Another hypothesis, said Glenwick, is that humor “helps kids achieve a sense of mastery. When you understand a joke, it brings in certain cognitive processes involving problem solving, and you feel a sense of mastery because you get the joke.”

According to Glenwick, though humor had been studied in regard to cognitive learning and the acquisition of information, before his study with Fichter, no one had considered how humor positively affects young children’s acquisition of motor behaviors.

He believes an understanding of the positive effects of humor on children’s motor skills may have some important broader applications, particularly in physical education classes and with participation on sports teams.

“What we’re suggesting here is that in addition to the kind of tough-love approach that a lot of gym teachers and coaches take, the introduction of some elements of humor might actually improve performance and cause kids to be more motivated and engaged,” Glenwick said.

Humor may also help children who are undergoing physical therapy, keeping them interested and focused in what can sometimes be challenging or very repetitive tasks.

Glenwick and Fichter’s article on their findings, “The Effect of Humor on Preschoolers’ Motor Task Performance,” has been published in the April 2015 issue of the Psychology and Education.