For Evon Hekkala, PhD, a new American Museum of Natural History exhibit is proof of something she’s known for a long time: Crocodiles are much more than just scales and teeth.

The museum’s new exhibit, Crocs: Ancient Predators in a Modern World, which opened on May 28, features a host of unique aspects about the reptiles, including four different species of live crocodiles for visitors to see.

“The more we learn about them, the more fascinating we find they are. They have interesting social lives, they have parental care, they have communal feeding, and they can be trained to come to a clicker like a domestic dog,” said Hekkala.

An assistant professor of biological sciences at Fordham, Hekkala has carved out a unique role working with genetics in museum specimens.

In 2011, she used DNA extracted from a crocodile specimen at the museum and other museums to prove that the Nile crocodile (Crocodylus niloticus) was actually two species, dubbing its cousin Crocodylus suchus. The name Crocodylus suchus actually means “The Sacred Crocodile,” and as such, her findings are featured in a section of the Crocs exhibit about sacred and mummified crocodiles.

“The ancient Egyptians believed these were a different species, and they mummified them,” she said. “Genetic work in my lab proved they were right.”

Hekkala’s research is focused on using historical collections of natural history specimens to understand how life is changing over time in response to climate change and human disturbance. As a longtime research associate at the museum’s Sackler Institute for Comparative Genomics, she was one of the first scientists allowed to sample DNA from the museum specimens. 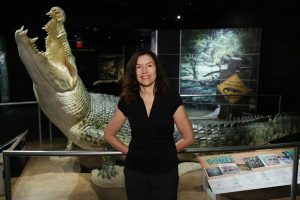 In addition to a life-size replica of Gomek, a 17 foot-long Australian salt-water crocodile who was famously friendly with people until his death in 1997, Hekkala said her favorite part of the exhibit is the live African dwarf crocodiles, which grow to no more than six feet long.

“I love that species because at the same time that I was discovering Crocodylus suchus, my collaborators at the museum were discovering three new species in the African dwarf crocodile,” she said. “The species helped confirm that the patterns we were finding made sense in terms of how the animals in Africa have evolved.
“Plus, those guys are just super cute,” she added.

The exhibit also has live Siamese crocodiles, the species that inspired Hekkala and her co-researchers to look at the crocodile genome for characteristics that might help develop new medicines for humans.

“Some research shows that they make antimicrobial peptides, which may in turn give us a source for new antibiotics,” she said.

Hekkala also doing micro-CT scans of crocodile mummies from the Brooklyn Museum to help identify species. Museum exhibits like Crocs are an exciting part of her work, she said.

“I believe that sharing science with the public, and with young people especially, is a great way to help us become a more scientifically literate society. It helps to get people excited about and involved in science,” she said.

The Crocs exhibit runs until January 2017.