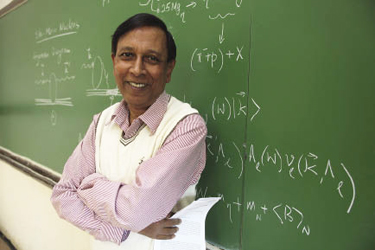 A Fordham physics professor and a colleague have confirmed the existence of a new form
of nuclear matter, one that they first predicted 25 years ago through theoretical studies.

The matter is composed of an eta meson trapped inside a nucleus, which they termed an eta-mesic nucleus. It is 100,000 times smaller than previously discovered mesic atoms.

Quamrul Haider, Ph.D., chair of the Department of Physics at Fordham, and Dr. Lon-chang Liu, staff physicist at Los Alamos National Laboratory, made the prediction in a paper published in 1986.

The paper, which has been cited in nearly 200 scholarly articles, helped to trigger many new fundamental studies in nuclear structure theory, and helped establish a new subfield in nuclear physics called “mesic nuclear physics.”

Attempts to confirm their prediction were conducted at sites around the world, including Los Alamos, the Brookhaven National Laboratory in New York and the Joint Institute for Nuclear Research in Dubna, Russia.

Then, the eta-mesic nucleus was detected in 2008 by a team of about 30 physicists from Germany, Poland, the United States, India, Bulgaria and Slovakia. This experimental discovery was made at Forschungszentrum Jülich in Germany, one of Europe’s largest interdisciplinary research centers.

The finding was published in the journal Physical Review in 2009.

Haider has spent the last three years poring over the data and conferring with Liu.

“A normal nucleus consists of a mixture of protons and neutrons. These particles are held together by a strongly attractive nuclear force between the nucleus’ constituents,” Haider said.

“An eta-mesic nucleus, on the other hand, is an exotic type of nuclear matter where, in addition to neutrons and protons, the eta meson is bound by the strong interaction inside a nucleus,” he said.

“In contrast with a normal nucleus, the exotic nucleus is at a higher energy state; the extra energy is due to the mass of the eta meson.”

The reaction process through which the eta-mesic nucleus is formed
Image courtesy of Quamrul Haider, Ph.D.

Because experimental confirmation of theoretical predictions is the bedrock of a physicist’s work, Haider said he and Liu needed to wait before announcing their results.

“One experimental confirmation is not enough. We have to have a waiting period, in case someone says, ‘Well, I did the same experiment but did not notice anything,’” Haider said.

“The most important thing is that the Jülich experiment has proved the existence of the eta-mesic nucleus,” he said, “though the binding energy of the eta—or the amount of energy that appears to be released when this eta is taken out of the nucleus—deviates somewhat from our predicted value.

“This deviation arises because our original prediction made use of only the leading-order nuclear dynamics. After implementing higher-order corrections, we redid the calculations and found that the measurements agree with our theory now,” he said.

Haider presented their preliminary results in June 2010 at the International Symposium on Mesic Nuclei in Krakow, Poland.  The full work was published that year in Journal of Physics.

Next, Haider hopes to see physicists verify their calculations indicating that any nucleus lighter than Carbon-12 cannot support a bound state.

“Whether there is such a lower nuclear limit for forming the eta-mesic nucleus is of great importance to improving our understanding of mesic nuclear matter. There’s a big school of physicists who believe that this kind of nucleus also exists in lighter systems, like helium or lithium,” he said.