skip to main content
Return to Fordham University
You are at:Home»Campus Locations»Rose Hill»Pre-Med Student Sets his Sights on Research 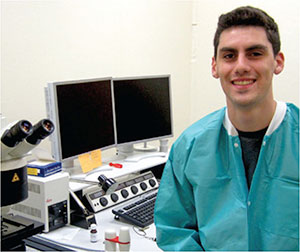 As a student at Staten Island Technical High School, Jonathan DeAssis volunteered on a cardiothoracic surgery ward. A physician invited him to stand beside him as he performed heart surgery.

“It was a very cool experience. From that point on I wanted to be a doctor,” says DeAssis, a Brooklyn native who is the first in his family to go to college. He graduated from Fordham College at Rose Hill in May.

“I wasn’t expecting that,” says DeAssis, who will attend medical school this fall. But as it turned out, he was good at it. He even traveled to the University of Notre Dame, Fordham’s partner in the research study, where he spent 10 days photographing the retinas of the rodents in one of the university’s labs.

The collaboration between the two universities came about through Fordham Science Council member John DelliSanti, FCRH ’88, GBA ’97, a former executive at Carestream. The medical imaging and IT company had invested in Notre Dame’s molecular imaging lab and was funding the study, which DelliSanti helped to oversee. While at Notre Dame, DeAssis worked on the university’s sophisticated in-vivo imaging machine, also donated by Carestream.

Pleased with the young researcher’s images and Fordham’s overall work on the study, Carestream donated an in-vivo imaging machine for Finnemann’s lab.

“It continues to be a very productive project,” says Finnemann. She hopes her research will contribute to the efforts to detect eye disease in its earliest stages.

“The fact that an undergraduate has the opportunity to participate in innovative research that has major implications for vision, for science, and for medical care—this is what students can accomplish at Fordham by seeking out a lab and volunteering and getting engaged,” says the professor.

DeAssis was “very serious about his project,” she adds, working in the lab twice a week despite his academic and volunteer commitments. He was also busy with medical school applications. This spring he learned he’d been accepted at five schools, and plans to attend Hofstra North Shore-LIJ School of Medicine, which offered him a full scholarship.

The oldest of four children in a close-knit family, DeAssis grew up in the Bensonhurst/Gravesend area of Brooklyn, next door to his grandparents. When he was 16, the whole clan moved to Staten Island.

A high school teacher suggested he apply to Fordham, and when he saw the green expanses and Gothic architecture of Rose Hill, he was convinced.

“I really wanted a campus,” says DeAssis, who played intramural basketball and football at Fordham, and volunteers with FUEMS, the Fordham University Emergency Medical Service. He was also drawn to the University’s Jesuit mission to produce homines pro aliis, “men and women for others.”

“As an aspiring physician” he said, “that really appealed to me.”