skip to main content
Return to Fordham University
You are at:Home»Science»Plants Adapt to Climate Change, But There’s a Catch
Elena Hamann’s research shows how field mustard is able to evolve to cope with both droughts and wet seasons. But the plants pay a price.
Brassica rapa, a spindly plant with yellow flowers that’s commonly known as field mustard, is great at adapting to rapid changes in its environment, be it heavy rainfall or drought.

But a recent study by Fordham scientists has found that plants that adapt to wild swings in precipitation still suffer adverse effects, including a reduction of seed production.

Hamann then grew four generations of plants in September 2016 under both drought and normal conditions in a greenhouse at the Calder Biological Field Station in Armonk, New York, and compared how the two different sets fared.

“In the long term, the droughts are becoming more and more severe, and we’ve also seen that in more recent generations, the plants are not able to maintain fitness as well, so they produce less seeds,” said Hamann, who was the study’s principal investigator. 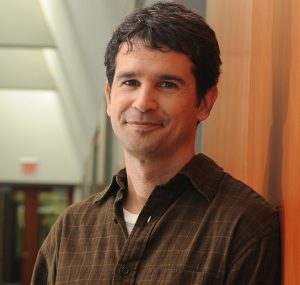 “So, we think that even though they adapt to drought by advancing flowering time and changing other specific traits, they are starting to suffer from the severity of drought. What they’re doing is basically not enough anymore.”

One of the most significant findings of the study is that paradoxically, rainy seasons actually hurt the plants’ ability to evolve in ways to cope with drought.

“After just two wet years, they flowered much later, but then there was another severe drought, so they then had to sort of evolve into earlier flowering again,” said Franks.

“But there’s a delay and they have less fitness, and produce fewer seeds. So they get fewer seeds into the seed bank for the next generation.”

The ability of a plant like Brassica rapa, which is closely related to turnips and bok choy, to weather droughts and rainy spells is important because wild swings in precipitation are the result of climate change that is likely to continue. In the area of California where Hamann and Franks harvested the plants, for instance, the most severe level of drought in 100 years happened only once between 1977 and 2004. But since then, the area has experienced several droughts that are equally severe or worse.

“The most recent report from the Intergovernmental Panel on Climate Change suggests that climate is changing even more than we thought,” said Franks.

“We’re seeing all these really substantial changes in this California system. Plant populations are responding, but there’s good evidence from this study that they may not be able to keep up with the severity of these changes.”

The results of the study, Two decades of evolutionary changes in Brassica rapa in response to fluctuations in precipitation and severe drought, was published this month in the journal Evolution.