skip to main content
Return to Fordham University
You are at:Home»Inside Fordham»Pair of ICCS Speakers Call for Coordinated Cyber Security 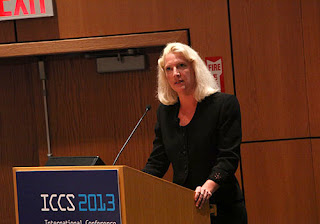 In back-to-back talks on Aug. 7 at Fordham’s Lincoln Center campus, Melissa Hathaway of Hathaway Global Strategies and Sandra Stanar-Johnson of the National Security Agency called for coordinated efforts to combat cyber terrorism.
“When we’re talking about cyber security, it’s not the United States versus the world and it’s not the private sector versus the public sector,” Hathaway said.
Their talks were part of day two of 2013 International Conference on Cyber Security (ICCS), hosted by Fordham and the Federal Bureau of Investigation
She added that since there are more devices in the U.S. than there are people, almost every aspect of daily life is effected by technology. This will only increase, she said, as everything from medical files to drinking water relies on some form of digital infrastructure.
As technology evolves, innate tensions are becoming more pronounced, such as the need for information sharing versus data protection, or freedom of expression versus political stability.
“Along with the changes, we’re seeing the challenges of democracy,” she said. “People are using the Internet to overthrow governments.” 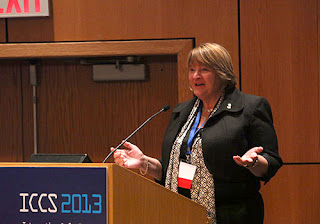 She said that that while leaders wrestle with complex problems, they will also be called upon to communicate the issues into everyday language.
“We have to be able to describe the problem to my mother and my son,” she said.
The risks are too huge not to face the problem, she said, with the U.S. already losing $300 billion annually to intellectual property theft. She added that 10 percent of American children under the age of 18 have already had their social security number stolen. She cited the example of one 16-year-old who cannot get a college loan because cyber theft marred his credit and put him $750,000 in debt.
“I would argue that all of us are victims,” she said. “But enough complaining, we need heroes.”
Stanar-Johnson concurred with several of Hathaway’s key points, and also called for a “unity of effort” not just among nations, but among government agencies as well. She cited Ed Stroz’s talk from Tuesday who said that an organization’s approach to security often relies on its culture.
Stanar-Johnson said that even cohesive organizations like the FBI or the NSA have a diversity of cultures within their organizations. To that end she cited the Comprehensive National Cybersecurity Initiative (CNCI) as a presidential directive that merges cybersecurity efforts between and within agencies.
Stanar-Johnson, who worked on developing the CNCI, also stressed the importance of needing a clear communicator at the top. Though she had very limited expertise in the technology, she said was chose by NSA director General Keith Alexander because of her communication skills.
“What they needed from me was to speak English,” she said. “I don’t speak cyber or even sub-cyber, but the challenge was to de-cluster that language.”
Fordham College at Lincoln CenterICCS
Share. Twitter Facebook Google+ Pinterest LinkedIn Tumblr Email