FCRH students Madeline Drucker and Michael Foster with their mentor Professor Thrall, and their high school mentee Laura Maca Bella (Photos by Tom Stoelker)
From examining how sports affect the behavior of young men to studying DNA replication and repair to exploring camp fashion at the Met Gala, student researchers tackled a diverse group of topics on the Rose Hill campus this summer. As participants in Fordham’s first annual Undergraduate Summer Research Program, the group of 40 Fordham College at Rose Hill scholars lived on campus from May 31 to Aug. 4 and formed a research community.

“We had STEM, humanities, and social science students in the mix. One of our goals was to get them to learn how to present their research to a wide audience—and to learn about what the others are doing,” said Maura Mast, Ph.D., dean of Fordham College at Rose Hill.

There have been summer research programs in the past, she said, but none that brought together the various disciplines and provided on-campus housing as well as a stipend. As in the spring and fall research programs, students also get a supply budget. There were regular cross-disciplinary events, such as a weekly lunch where faculty discussed their research interests with students. The program was entirely funded by gifts from donors. 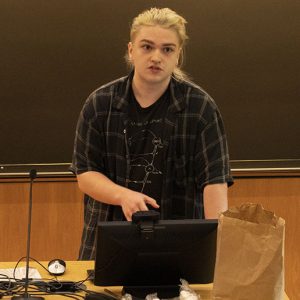 Alexander Gannon on “Women at the End of Modernity: A Transfeminist History of May ’68 France and its Aftermath”

The program, which was organized by Psychology Professor Rachel Annunziato, Ph.D., associate dean for strategic initiatives, and Christopher Aubin, Ph.D., associate professor of physics, culminated on Aug. 2 and 4 with succinct presentations. Each student had only five minutes to present their findings, which was then followed by about three minutes to take questions from an audience of fellow presenters and faculty.

“You just have a few minutes to tell someone why what you do is really important and if you can’t do it in that amount of time then maybe you don’t understand it well enough,” said Aubin. “It’s harder to give a short talk than a long talk and five minutes is definitely very short, but I always like to tell students that they need to learn how to make their elevator pitch.”

As in years past, local high school students from the STEP Program were invited to assist the undergraduates in science research.

“Obviously it’s a win for the high school students because they get to work very closely with a more experienced student in the lab and they’ll just learn faster that way,” said Elizabeth Thrall, Ph.D., assistant professor of chemistry. “But it’s also a win for the undergraduate who’s mentoring a high school student because they get a better understanding of their project by teaching it and explaining to someone else.”

Thrall mentored rising seniors Michael Foster and Madeline Drucker on a project focused on a process known as translesion synthesis, a mechanism that is used for copying DNA that has been damaged. The process has implications for the development of antibiotic resistance in bacteria and the mutation of cancer cells. Drucker’s task was to make new bacterial strains that could be examined in the microscope, with Foster validating the work. It’s complex research that when undertaken by students during the school year often gets interrupted by other classes and activities. 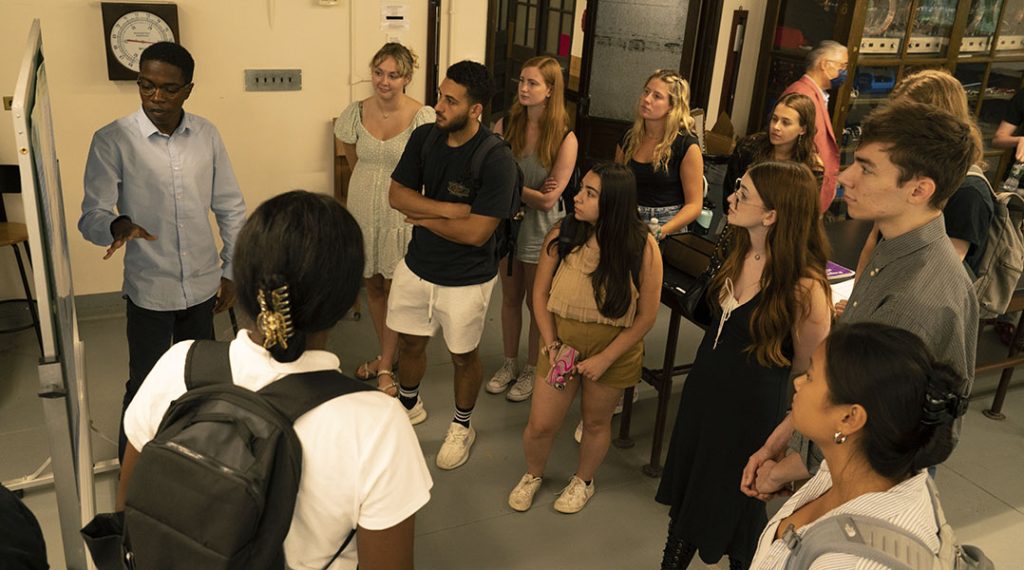 Students from STEP present their research to their Fordham undergraduate mentors.

A Full-Time Focus on Research

“The program is unique because they just make so much progress in their research because they can devote themselves to it full time,” said Thrall. “Things that we do in the lab are very hard to fit in around classes, but when they’re there for a whole day, they can just be there for every step of the process. And I think that really helps them to see how everything fits together and take more ownership.”

Foster, who is planning on pursuing a Ph.D. to become a professor, said the presence of a high school student in the lab gave him an opportunity to practice teaching. He was assigned to mentor high school senior Laura Maca Bella. Drucker took on a mentorship role as well.

“Laura was just fantastic at it. She took to it really quickly and it’s not easy stuff. It was a lot of information for her to get and not a lot of time. It was really gratifying to see her be able to run these experiments independently,” said Foster. “Madeline may not have worked as closely with Laura as I did, but she always tried and help explain things to Laura when maybe I had flubbed it.

Drucker said that flubs and mistakes are part of the nature of working in a lab.

“It’s a growing environment and you’re there to build off of each other and we learn from each other’s mistakes and move forward,” said Drucker. “If you notice somebody make a mistake, you’re there to help them. And that’s where it’s nice being here this summer; it feels like the pressure of school is kind of off and we can just do the science.”

The program was funded with gifts from several donors, including a significant gift from Boniface “Buzz” Zaino, FCRH ’65, a senior advisor at Royce Investment Partners. His gift helped forge the creation of the research community, providing for the on-campus housing and cross-disciplinary events.

Zaino, who worked his way through Fordham as a cater waiter, said he relished the time he spent on campus talking about philosophy with the Jesuits in the student center. In a phone interview, he said was pleased to hear that a similar atmosphere had evolved over the summer with students discussing their work with each other over coffee or lunch.

“Back then, we would philosophize over stuff that had nothing to do with the coursework, so hopefully the new program will grow to be the same thing so students can watch the reaction of their peers and expand on what they know.”

Zaino said that even in his own work he loves the part of his job that requires in-depth research.

“In my field when we talk about investment research for the stock market, you can always tell when someone does independent research because it’s the best kind of knowledge; it expands perspectives so they make better decisions,” he said. “Through research, you begin a process of inquiry that opens up worlds for students. It’s emboldening.”