Rattus norvegicus, best known to New Yorkers as the Norway, sewer or subway rat, are a common feature of cities around the world, but unlike black rats and house mice, they only migrated fairly recently from their native Northern China and Mongolia to the rest of the world.

In a study published on Oct. 19 in the Royal Society’s flagship journal Proceedings B, scientists from Fordham reveal the complex routes that Rattus norvegicus has taken over the last several centuries, and where different lineages have settled and occasionally mixed with each other.

Global population divergence and admixture of the brown rat (Rattus norvegicus) was authored by Emily Puckett, Ph.D., postdoctoral associate at Fordham’s Louis Calder Biological Field Station, along with 17 co-authors. The study is the first large-scale genomic analysis of brown rats around the world, using 314 specimens from 76 locations that were submitted over the last three years to the lab of co-author Jason Munshi-South, Ph.D., associate professor of biology.

Understanding the evolution and ecology of Rattus norvegicus is important because they cause billions of dollars in damage annually around the world, and significantly degrade the quality of life and health of city dwellers.

The Fordham study determined that 13 evolutionary clusters have followed five routes out of China and Mongolia. The first expansion traveled southward into Southeast Asia, and then moved east, toward the Pacific coast of Asia. 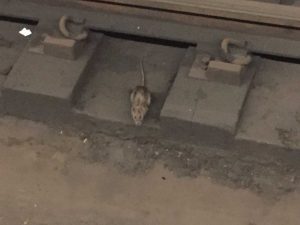 Rattus norvegicus, where New Yorkers are accustomed to seeing them.
Photo by Jason Munshi-South

Over time, two groups headed west to North America—one via Alaska’s Aleutian Islands, and another towards the Pacific Coast of North America. Meanwhile, another group ventured west, making it through Western Asia and the Middle East, and into Europe, where they split into two subgroups in Western Europe and Northern Europe.

For Americans, Puckett said this study in phylogeography is useful because it illustrates how Rattus norvegicus arrived on the continent via different routes, and with different genetic makeups. Further study will examine how individual populations vary genetically, with the aim of determining the best way to control diseases that rats spread.

For instance, the study found that in New York City, the rats that arrived from Western Europe, most likely on British ships, have to this day remained the only brown rat lineage to establish itself. In contrast, some rat populations on the west coast exhibit evidence of colonization from both Europe or eastern North America, and Asia.

Even for rats, New York City is a tough place to make it as an outsider.