The work of current and former Fordham biology students is included in a new episode of the American Museum of Natural History’s Shelf Life, an ongoing web series on the research done through the museum, and featured on its website.

Evon Hekkala, Ph.D., associate professor in the Department of Biological Sciences and an AMNH research associate, worked with Fordham students on research projects focusing on DNA from historical leopard, monitor lizard, and crocodile specimens, all found on-site within the museum’s collections. The research is featured in Shelf Life’s Episode 16, Tales from the Cryptic Species. 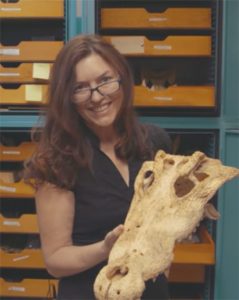 “The museum is home to 33 million specimens collected over the past 150 or 200 years that can help us understand how the world is changing,” said Hekkala. “It’s essentially an archive of the history of life on earth.”

Corey Anco, a Graduate School of Arts and Sciences student that Hekkala has worked with doing research on leopard DNA, said that the Hekkala lab “explores how historical processes have shaped the current distribution and diversity of species.”

Anco brought attention to the fact that while the general ecology of the leopard is known and understood, the real levels of genetic variation, and thus, the actual number of leopard species, are not clear.

“Prior to our work, only two studies explored the genetic diversity of African leopards at the continental scale,” said Anco. “We seized the opportunity to reexamine the African leopard using AMNH’s vast collection of skulls spanning sub-Saharan Africa.”

Stephanie Dowell, Ph.D.( GSAS ’15), a geneticist for the U.S. Fish and Wildlife Service, worked with Hekkala to research the Nile monitor lizard.

She said that Hekkala has  “the type of enthusiasm that helped me keep up my scientific momentum throughout my graduate career.”

Dowell said she relied heavily on museum specimens for her research. The specimens allowed her to have access to DNA samples from regions of Africa that are too dangerous to travel to today.

“I was able to obtain genetic information from Nile monitors that spanned the African continent. Although Nile monitors are considered a single species throughout their range, I noticed that individuals from West Africa were genetically very different from the rest of the continent,” said Dowell.
Hekkala said that the students learn intricate lab techniques working at AMNH, including how to “suit up” so that their own DNA doesn’t mingle with the DNA samples they are working with.

They also get an overview of how species change over time, and whether or not, and when, they are threatened by human activities.

“If we can use these historical specimens to understand how we are altering the environment, then we can help predict future threats to both species and ecosystems, and discover how we might want to change our behaviors to avoid problems. To me, that’s making the world a better place.”