On April 9 and April 15, Fordham’s arts and sciences undergraduates presented their original research on the Lincoln Center and Rose Hill campuses. 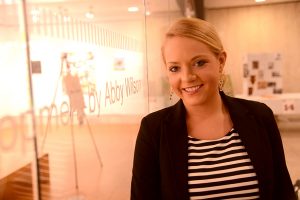 More than 50 research presenters and 105 students participated in the April 9 event that was spread among the lobbies, galleries, studios, and theaters of the Lowenstein Center.

Junior Prescilla Consolo’s project focused on the history of public policy and private planning efforts to renew Coney Island. As an interdisciplinary history major, she said her coursework is actually geared more towards the future.

“It’s not about memorizing dates and names,” she said. “Here at Fordham we look for meaning and connections to the bigger picture.”

“In our overstimulated world we sometimes forget to listen,” Stricker said in her introduction. 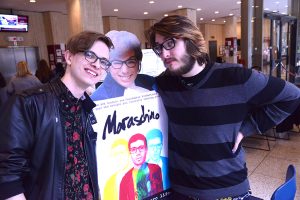 Parron’s movements veered from sharp and intricate to flowing and calm. After the dance Parron said that Stricker encouraged her to improvise some of the calmer passages in order to juxtapose serenity with the sharpness of city life.

“She challenged me to think about what it’s like living in the city with technology and its fast pace. The improv is slow … trying to get back to nature.”

On the plaza level, senior Matthew Miller was also considering nature, but at much closer range. Miller did research with Associate Professor Jason Morris, PhD, on the fruit fly larvae’s responses to invading organisms, such as a wasp that might inject a larva with its own eggs.

To protect itself, the fruit fly forms a crystalized shell of melatonin around the invading parasite, isolating and killing it. Miller’s research looks at how mutating the fruit fly’s gene might illicit the same response.

“The big question is whether this is an immune response or some other genetic mechanism that’s causing the response,” said Miller. 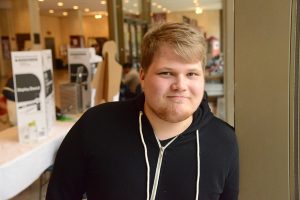 Senior theology major Sebastian Rodriguez’s project pondered the meaning of giving. He said that he began thinking about analyzing giving by using logic after he went on several volunteer projects with the Dorothy Day Center.

“When we go into these projects we realize very early on that what we can do is very limited,” he said. “But at the same time we feel it’s the correct thing to do.
I’m trying to bridge that gap between what we feel and what we’re doing in a very logical way.”

Rodriguez researched the relationship between liberation theology and the theory behind social justice in order to develop what could only be described as “radical best practices for volunteerism.” His results are not for the weak of heart.

“The only plausible option is radically becoming the other,” Rodriguez writes in his project. “This entails intelligent strategizing and simultaneous participation in the other’s suffering, to the point of near physical or social death. Where there is a preferential option for the wretched, the privileged must abandon what separates them from grace.”

“What I would add to that is that it should be done intelligently and in a well thought out way,” he said.

Amy Tuininga, PhD, said she got her first post-bachelor’s position as research technician after she returned from a research expedition—a call came out of the blue from professor who she barely knew for a job she had not applied for.

Assuming it was a student-worker’s hourly wage, she told him she couldn’t take the job because she was holding out for a salaried position: when the professor told her it was fully salaried, she asked “when do I start?” 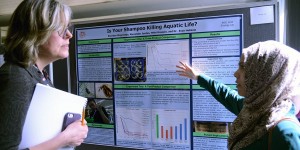 On April 15, Tuininga directed her anecdote to the more than 300 students sharing their original research through oral and poster presentations at Fordham College at Rose Hill‘s Eighth Annual Undergraduate Research Symposium in the McGinley Center.

“This will be a foundation for work which you will do throughout your life,” said Tuininga, associate professor of biology and interim chief research officer.

“Is Your Shampoo Killing Aquatic Life,” a project by Brandon Mogrovejo, Mithi Hossain, and Jordan Alexander (working under the guidance of Evon Hekkala, PhD, assistant professor of biological sciences and one of 95 faculty mentors) measured the effects of shampoo runoff on the ecosystem of the metropolitan area’s waters. 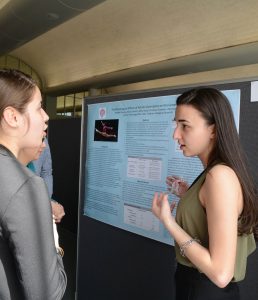 Altina Kukaj explains research on girls who do high-impact sports.

They found that the commercial shampoo killed the most water fleas. Surprisingly, Dr. Bonner’s organic soap did not have a large effect in the first experiment and, in the second, left even more water fleas alive than the clean water control group. (Students hypothesized that some fleas in the Dr. Bonner solution were pregnant at the time of entry and gave birth, pushing survival numbers higher.)

The project was designed to show “what these chemicals do to us,” said Mogrovejo.

“All the stuff we use is going down the drains,” he said. “Even taking out a little organism like Daphnia can have huge effects on ecosystems and streams.”

In “The Physiological Effects of Artistic Gymnastics on the Growing Female,” students Kelsey Donlon, Natalie Cheung, Altina Kukaj, and Anastasia Tzanides looked at the effects of intensive training on the bodies of young girl gymnasts. Their faculty mentor was Usha Sankar, PhD, instructor of human physiology.

Among a group of 400 girls age 6 to 16, they measured for body fat, bone mass density, and various hormonal levels.

“As a group of four females, we were definitely interested in the female body,” said Donlon. “We’ve heard that high-impact sports might have an effect on how a girl grows.”

“You [are]restless, curious people, bent on discovery,” he said. “Make that a part of the legacy you leave to your younger sisters and brothers.”

The public event attracted faculty, students, and alumni to whom research has special emphasis–several of whom have created fellowships. Boniface Zaino, FCRH ’65, co-sponsor of many research fellowships and the symposium with his wife, Alison, said the fair creates a chance for students to “learn the steps” of doing research; from selecting a topic, setting an end goal, gathering materials, analyzing them, and coming to a conclusion.

“It’s a wonderful experience for them,” said the financial analyst.

(Janet Sassi contributed to this report.)